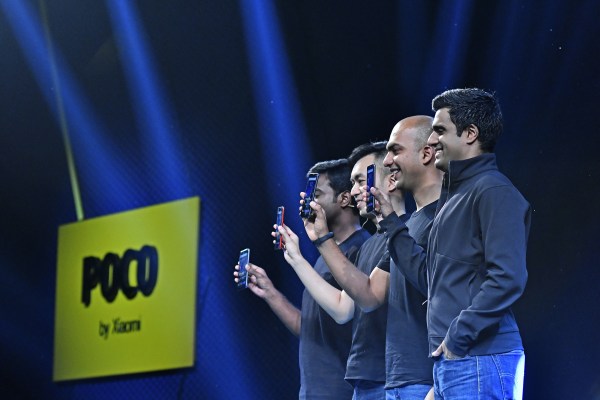 Xiaomi said today it is spinning off POCO, a sub-smartphone brand it created in 2018, as a standalone company that will now run independently of the Chinese electronics giant and make its own market strategy.

The move comes months after a top POCO executive — Jai Mani, a former Googler — and some other founding and core members left the sub-brand. The company today insisted that POCO F1, the only smartphone to be launched under the POCO brand, remains a “successful” handset. The POCO F1, a $300 smartphone, was launched in 50 markets.

Manu Kumar Jain, VP of Xiaomi, said POCO had grown into its own identity in a short span of time. “POCO F1 is an extremely popular phone across user groups, and remains a top contender in its category even in 2020. We feel the time is right to let POCO operate on its own now, which is why we’re excited to announce that POCO will spin off as an independent brand,” he said in a statement.

A Xiaomi spokesperson confirmed to TechCrunch that POCO is now an independent company, but did not share how it would be structured.

Xiaomi created the POCO brand to launch high-end, premium smartphones that would compete directly with flagship smartphones of OnePlus and Samsung. In an interview with yours truly in 2018, Alvin Tse, the head of POCO, and Mani, said that they were working on a number of smartphones and were also thinking about other gadget categories.

At the time, the company had 300 people working on POCO, and they “shared resources” with the parent firm.

“The hope is that we can open up this new consumer need …. If we can offer them something compelling enough at a price point that they have never imagined before, suddenly a lot of people will show interest in availing the top technologies,” Tse said in that interview.

It is unclear, however, why Xiaomi never launched more smartphones under the POCO brand — despite the claimed success.

In the years since, Xiaomi, which is known to produce low-end and mid-range smartphones, itself launched a number of high-end smartphones, such as the K20 Pro. Indeed, earlier this week, Xiaomi announced it was planning to launch a number of premium smartphones in India, its most important market and where it is the top handset vendor.

“These launches will be across categories which we think will help ‘Mi’ maintain consumer interest in 2020. We also intend to bring the premium smartphones from the Mi line-up, which has recorded a substantial interest since we entered the market,” said Raghu Reddy, head of Categories at Xiaomi India, in a statement.

That sounds like an explanation. As my colleague Rita pointed out last year, Chinese smartphone makers have launched sub-brands in recent years to launch handsets that deviate from their company’s brand image. Xiaomi needed POCO because its Mi and Redmi smartphone brands are known for their mid-range and low-tier smartphones. But when the company itself begins to launch premium smartphones — and gain traction — the sub-brand might not be the best marketing tool.

Tarun Pathak, a senior analyst at research firm Counterpoint, told TechCrunch that the move would allow the Mi brand to flourish in the premium smartphone tier as the company begins to seriously look at 5G adoption.

“POCO can continue to make flagship-class devices, but at lower price points and 4G connectivity. 5G as a strategy requires a premium series which has consistent message across geographies…and Mi makes that cut in a more efficient way than POCO,” he said.

Besides, Xiaomi has bigger things to worry about.

In our recent Xiaomi’s earnings coverage, we noted that the Chinese electronics giant was struggling to expand its internet services business as it attempts to cut reliance on its gadgets empire. Xiaomi posted Q3 revenue of 53.7 billion yuan, or $7.65 billion, up 3.3% from 51.95 billion yuan ($7.39 billion) revenue it reported in Q2 and 5.5% rise since Q3 2018.

On top of that, the smartphone business revenue of Xiaomi, which went public in 2018, stood at 32.3 billion yuan ($4.6 billion) in Q3 last year, down 7.8% year-over-year. The company, which shipped 32.1 million smartphone units during the period, blamed “downturn” in China’s smartphone market for the decline.