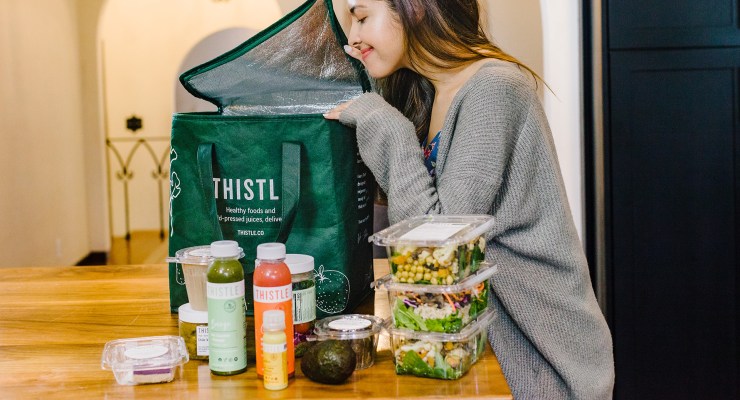 What if it was easier to eat salad than junk food? Most diet routines take a ton of time, whether you’re cooking from scratch, making a meal kit, or seeking out a nutritious restaurant. But on-demand prepared food delivery companies like Sprig that tried to eliminate that work have gone bankrupt from poor unit economics.

Thistle is a different type of food startup. It delivers thrice-weekly cooler bags customized with meat-optional, plant-based breakfasts, lunches, dinners, snacks, sides, and juices. By batching deliveries in the less-congested early morning hours and optimizing routes to its subscribers, or by mailing weekly boxes beyond its own geographies, Thistle makes sure you already have your food the moment you’re hungry. Whether you heat them up or eat them straight out of the fridge, you’re actually dining faster than you could even place an Uber Eats order.

The food on Thistle’s constantly rotating men is downright tasty. You might get a sunrise chia parfait for breakfast, a chicken tropical mango salad for lunch, a microwaveable bulgogi noodle bowl for dinner, with beet hummus and kale-cucumber juice for snacks. Thistle’s not cheap, with meals averaging about $14 each. But compared to competitors’ on-demand delivery markups and service fees, wasting ingredients from the grocer, and the hours of cooking for yourself, it can be a good deal for busy people.

“We see Thistle as part of a movement to make health convenient rather than a high will power chore” CEO Ashwin Cheriyan tells me. What Peloton did to shave time off getting a great workout, Thistle does for eating a nourishing meal. It makes the right choice the easiest choice.

The idea of button you can push to make you healthier has attracted a new $5.65 million Series A round for Thistle led by its first institutional investor, PowerPlant Ventures . Bringing the startup to $15 million in funding, the cash will expand Thistle’s delivery domain. Dan Gluck of PowerPlant, which has also funded food break-outs like Beyond Meat, Thrive Market, and Rebbl, will join the board.

Currently Thistle delivers in-person to the Bay Area, LA metro, San Diego, and Sacramento while shipping to most of Washington, Oregon, Utah, Idaho, Nevada, and Arizona. Thistle actually held off on raising more since launching in 2013 to make sure it hammered out unit economics to prevent an implosion. It’s also planning broader meal options, additional product lines, and fresh distribution strategies like getting stocked in office smart kitchens or subsidized by wellness plans.

“The reasons that so many food delivery companies have failed likely fall into two buckets: one, a lack of focus on margins and unit economics, and two, premature geographic expansion before proving out the business model” says Cheriyan. “Thistle makes money similar to how a well run restaurant would make money – by having strong gross margins, efficient customer acquisition costs, and solid customer retention / lifetime metrics. We currently deliver tens of thousands of meals on a weekly basis to customers on the West Coast and our annual average growth rate since launch has been 100%+.”

It’s nice that Thistle hasn’t gone out of business because I’ve been eating its salads 6X a week for three years. It’s been the most efficient way for me to get healthier and lose weight after a half-decade of ordering takeout sandwiches and then feeling sluggish all day. I legitimately look forward to each one since they often have 20+ ingredients and only repeat every few months so they’re never boring.

It’s helped me keep my work-from-home lunches to about 20 minutes so I have more time for writing. Thistle is one of the few startups I consistently recommend to people. When asked how I lost 25lbs before my wedding, I point to Peloton cycling, Future remote personal training, and Thistle salads — none of which require me to leave the house.

Cheriyan tells me “We wanted the better-for-you and better-for-planet choice to be the default choice.”

Growing Out Of On-Demand

Thistle has already pivoted past the business model burning tons of cash across the startup world. The company started as an on-demand cold pressed juice delivery service, sending hipster glass bottles of watermelon and charcoal extract to doors around San Francisco. It was 2013, yoga was booming, and people were paying crazily high prices for liquified lemongrass. Health made simple seemed like a sure bet to the founding team of Alap Shah, Naman Shah, Sheel Mohnot, and Johnny Hwin, some of whom run Studio Management, a family office and startup incubator. [Disclosure: Hwin and Shah are friends of mine but didn’t pitch or discuss this article with me.]

Thistle eventually straightened things out with a shift to subscriptions and batched delivery under the leadership of the hired executives, Cheriyan and his wife and COO Shiri Avnery. “I came from a family of physicians – both my parents, brother, and enough aunts, uncles, and cousins are doctors that they could start a small hospital” Cheriyan, a former corporate attorney in M&A tells me. “A common point of frustration was about patients suffering from diet related illnesses who were unable to make a lifestyle change because it was too hard.”

Avenery, a PhD in air pollution and climate change’s impact on agriculture, had become exasperated with the slow pace of policy change and the inaction of governments and corporations. The two quit their jobs, moved to San Francisco, and searched for a point of leverage for positively influencing people diets and interaction with the environment. They teamed up with the founders and launched Thistle v1.

A lack of experience in logistics led to the initial detour into on-demand. But rather than trying to fix the problem with VC money, Thistle stayed lean and discovered the opportunity nestled between UberEats and BlueApron: sending people food they don’t have to eat now, but that takes low or no time to prepare when they’re peckish. Through its app, users can customize their meal plans, ban their allergens, pause deliveries, and see what they’ll eat next.

A sample of Thistle 8 meal plans

“The unit economics problem most heavily plagued the early on-demand food companies. Food / labor waste and inefficient deliveries were likely the biggest reasons why the economics were unsustainable without venture life support. We know this personally as Thistle started our delivery service as an on-demand company before quickly realizing that the unit economics couldn’t sustain a healthy business” Cheriyan explains, regarding companies like Sprig, DoorDash, and Grubhub. Beyond unsold food, “the margins very likely did not support ordering a $12-$15 single meal for immediate delivery when average hourly driver wages reached $18-20.”

Meal kits were supposed to make dining healtheir and cheaper, but they proved too much of a chore and led customers to boxes of ingredients piling up unused. Munchery and Nomiku went out of business while giants like Blue Apron have incinerated hundreds of millions of dollars and seen their share prices sink.

“The meal kit companies fared a little better from a gross margin perspective (due to preorders and more efficient deliveries) but suffer most from an easy-to-copy business model. This led to a rise in copycats, and, as a result, heavily rising customer acquisition costs, low switching costs and poor retention” Cheriyan tells me. “Fundamentally the meal kit companies face another challenge, which is that people have less and less time to cook and are increasingly looking for ready-to-eat options.”

A slower, steadier approach with less overhead, more convenience, and fewer direct competitors has helped Thistle grow to 400 employees from culinary to engineering to logistics.

Still, it’s vulnerable. It may still be too expensive for some markets and demographics. Logistics experts like Amazon and Whole Foods could try to barge into the market. Cloud kitchens without dining rooms are making restaurant food more affordable for delivery. And another startup could always take the gamble on raising a ton of cash and subsidizing prices to steal market share, especially where Thistle doesn’t operate yet.

Thistle could counter these threats would be further eliminating delivery costs by selling through partners like office smart fridges where employees pay on the spot, or equipping gym lobbies with more than just Muscle Milk.

“One opportunity we’re excited to test is attended and unattended retail – it would be great to be able to pick up Thistle products at your local grocery store, gym, or coffee shop” Cheriyan says. As for offices, “Today’s corporate lunchtime solutions often require a tradeoff between health and convenience: either wait in line for 30+ minutes at your favorite salad spot for a healthy option, or opt into catered restaurant meals that leave you feeling sluggish and unproductive.” Thistle could help employers prevent the 3pm energy lull.

The startup’s focus on plant-forward meals also centers it in the path of another megatrend: the shift to environmentally-conscious diets. Almost 60% of of Americans are trying to eat less meat and 50% are eating meat-alternatives like Impossible Burgers. That stems both from interest in the humane treatment of animals and how 15% of green house emissions come from livestock. But 45% of Americans say they hate to cook. That’s why Thistle makes pre-made meals where meat and egg are optional, but the food is healthy and delicious without them.

In the age of Uber, we’ve acclimated to an effortless life. The new wave of ‘push-button health’ startups like Thistle could finally take the hassle out of aligning your actions in the gym or kitchen with you intentions.

Samsung has the MacBook Pro in its sights with the $2,400 Galaxy Book 3 Ultra
Apple’s hardware VP on the HomePod’s return
Neko, Daniel Ek’s next play, is another spin on preventative healthcare
Apple TV users can now watch Major League Soccer matches with MLS Season Pass
TikTok introduces a strike system for violations, tests a feature to ‘refresh’ the For You feed