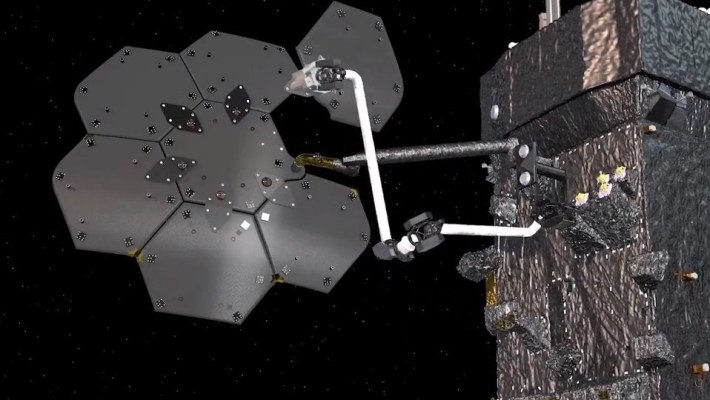 The space infrastructure dexterous robot, or SPIDER, program will be part of NASA’s Restore-L mission to demonstrate automation of proposed orbital tasks like reconfiguring or repairing a satellite or manufacturing new components from scratch.

The first thing the Restore-L spacecraft will do is show that it can synchronize with, capture, connect with, refuel a satellite in orbit, then release it into a new orbit. Afterwards the craft will use a Maxar-built robotic arm to assemble a multi-panel antenna reflector, then test it.

Last, a separate piece of hardware, Tethers Unlimited’s MakerSat, will extrude a beam some 10-20 meters long, which will be inspected by the parent satellite, then detached and reattached to demonstrate its robustness.

There’s no hard timeline for the mission yet, so don’t expect anything for at least a year or two. This isn’t a small-scale experiment that can fly up next week in an Electron — it’s a big, expensive one that will likely take up most of a large rocket’s payload.

Although it’s only a demonstration, a Maxar representative pointed out that it is very close to what would be an operational system on other satellites in the future. It has also been previously demoed on the ground, though of course that’s no substitute for the real thing.

Robotic arms are something of a specialty for Maxar, which has delivered six total for NASA, including the one on Insight (currently on the Red Planet) and the Mars 2020 Rover (due to receive its official, inspirational name any day now).

We’ll have Maxar’s head of space robotics on stage at TC Sessions: Robotics+AI in March at UC Berkeley, so be sure to join us there if you’d like to hear more about the business of building space robots.

SPIDER will be integrated with the spacecraft bus Maxar is building for @NASA Restore-L project, which will refuel a satellite in low Earth orbit. SPIDER will enable spacecraft components to be robotically assembled and reconfigured while on-orbit. Learn more: pic.twitter.com/XfPquzmsKi

Raylo raises $136M to build out its gadget lease-and-reuse ‘fintech’ platform
Breef raises $16M to match brands with marketing agencies
Addressable raises $7.5M to match crypto wallets to Twitter accounts. But how?
The UK rolls back controversial plans to open up text and data mining regulations
Nothing’s second phone will take on the US this year