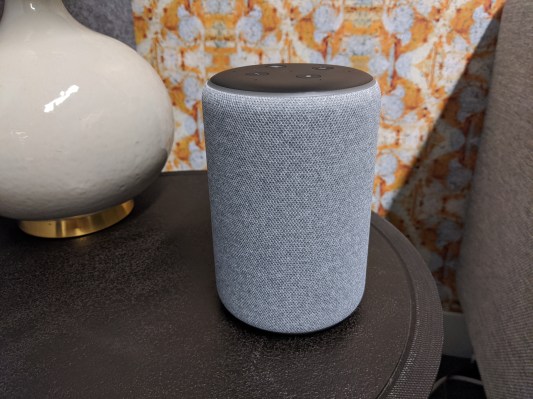 U.S. consumers aren’t adopting voice-based shopping as quickly as expected, according to a new report today from eMarketer. While consumers have been happy to bring smart speakers into their home, they continue to use them more often for simple commands — like playing music or getting information, for example — not for making purchases. However, the overall number of voice shoppers is growing. It’s just slower than previously forecast, the analysts explain.

By the end of this year, eMarketer estimates that 21.6 million people will have made a purchase using their smart speaker. That’s lower than the Q2 2019 forecast, which expected the number to reach 23.6 million.

Still, it’s important to point out that the overall number of people making purchases via a smart speaker is growing. It will even pass a milestone this year, when 10.8% of all digital buyers in the U.S. will have made a purchase using their smart speaker.

EMarketer attributes the slower-than-anticipated growth to a number of factors, including that security concerns are leading people to not yet fully trust smart speakers and their makers. Many consumers would also prefer a device with a screen so they could preview the items before committing to buy. Apple and Google have addressed the latter by introducing smart home hubs that include screens, speakers and built-in voice assistants. But consumers may have already bought traditional Echo and Google Home devices and don’t feel the need to upgrade.

In addition, the report upped the estimates for percentage of users listening to audio (81.1%) or making inquiries (77.8%).

“Though there are thousands of smart speaker apps that do everything from let you order takeout to find recipes or play games, many consumers don’t realize that they need to take extra and more specific steps to utilize all capabilities,” said eMarketer principal analyst Victoria Petrock. “Instead, they stick with direct commands to play music, ask about the weather or ask questions, because those are basic to the device.”

To be fair, a forecast like this can’t give a complete picture of smart speaker usage. Many consumers do ask Alexa to add items to a shopping list, for instance, which they then go on to buy online at some point — but that wouldn’t be considered voice-based purchasing. Instead, the smart speaker sits as the top of the funnel, capturing a consumer’s intention to buy later, but doesn’t trigger the actual purchase.

That said, Amazon, in particular, has failed to capitalize on the potential for voice shopping, given how easily it can tie a voice command to a purchase from its site. Perhaps it became a little gun-shy from all those mistaken purchases, but the company hasn’t innovated on voice shopping features. There are a number of ways Amazon could make voice shopping a habit or turn one-time purchases into subscriptions, just by way of simple prompts.

Amazon could also develop a set of features, similar to Honey (now owned by PayPal), that allow users track price drops and sales, then alert Echo owners using Alexa’s notifications platform or even an “Amazon companion” skill, that could be added to users’ daily Flash Briefings (e.g. “The item you were watching is now $50 off. The new price is…$X…would you like to buy it?”). The companion could also track out-of-stock items, alert you to new arrivals from a favorite brand, or even send product photos to the Alexa companion app, as suggested deals.