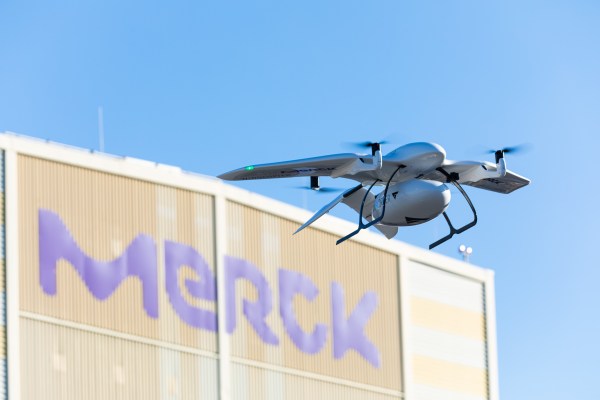 Drone startup Wingcopter, working with partners Merck and the Frankfurt University of Applied Science, has completed a first flight of a new drone delivery trial designed to show the benefits of using drones instead of trucks or other road faring vehicles for moving small cargo between two physically separate office facilities. This first flight covered around 25 km (roughly 15.5 miles), taking a sample of pigments from one Merck lab in Gernsheim to its headquarters in Darmstadt in Germany.

This trial is significant in more ways than one: The area it covered spanned a fairly dense metropolitan area, flying over power lines, trains, roadways and more. It also did all of this without continuous line-of-sight, something that’s been required of most drone delivery trials in a commercial setting to date. The partners involved are hoping this means it can stand as a blueprint to other similar pilot projects and trials being run all over the world.

Next up, the project will continue to fly additional deliveries and then summarize their findings in a report to be delivered in March. Already, using drones instead of trucks seems to provide advantages in terms of time (saving between an hour and even a full day in some cases) and emissions, and it can cut down on the amount of empty return trips made by large, heavy gas-guzzling vehicles as well.

Wingcopter CEO Tom Plümmer points out in a press release detailing the news that his company has “repeatedly demonstrate” the advantages of drone delivery across a number of use cases, including for use in getting life-saving medical supplies to remote areas. Trials in the U.S. include Alphabet’s Wing, which partnered with FedEx, and UPS, which is working with Matternet, but this commercial trial shows a potentially more fruitful avenue for deploying services in the near-term that don’t require buy-in from the average consumer.