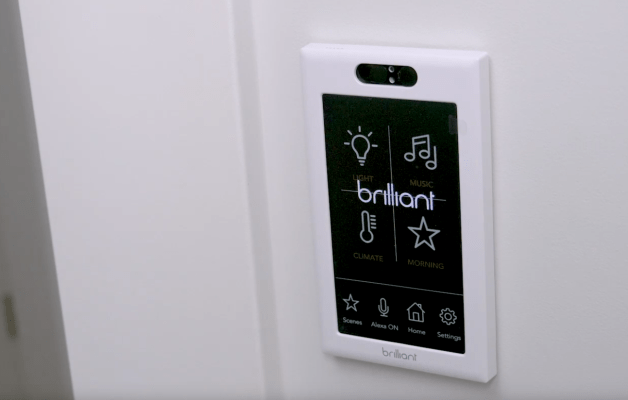 Controlling your smart home gadgets from your phone or by voice isn’t exactly a chore, but after setting up a bunch of smart lights, a Wi-Fi lock, thermostat and a few more smart devices, I came to miss the ability to control at least some of them with a physical switch. Add to that the simple fact that your visitors suddenly don’t have a clue how to turn off the lights and you may just want to go back to basic light switches. Thankfully, that’s something the industry has realized, too, and we’re seeing a few more smart hardware controllers now, too.

At CES this year, Brilliant announced a new smart plug and switch to complement its existing touchscreen smart home controller. The new hardware is still a few weeks away, but ahead of the launch, I got a chance to try out the existing Brilliant controller, which has been on the market for a while but has received numerous updates and support for new integrations ever since. One of the latest integrations is with Schlage’s Encode Wi-Fi lock, which I also tested.

The promise of the Brilliant Controls is that you will be able to control all supported smart home gadgets from the physical and touchscreen controls — and, of course, it also turns the light switches you replace with it into smart switches. It also comes with a built-in camera (with a privacy shutter) that you can use either for room-to-room video chats or to check up on your home while you are away. The video quality isn’t great, but good enough for its intended purpose.

Supported devices include Wemo smart plugs, Ring alarms, Sonos speakers, Philips Hue and Lifx lights, as well Schlage, Yale and August locks, among others. The number of integrations keeps growing and covers most of the major brands, but if you’ve bet on other systems, this isn’t the controller for you. It also comes with built-in Alexa support and works with the Google Assistant, too.

Depending on how you feel about working with electricity in your home, the physical installation of the Brilliant Controls (I tested the $299 single and $349 dual switches) is either a breeze or will cause you nightmares. If you’ve ever changed a light switch, though, the installation couldn’t be easier, and Brilliant offers both an in-depth printed installation guide and video tutorials.

My own experience was pretty straightforward, assuming that your home’s electricity system is relatively modern and conforms to today’s standards. Installing the single switch took me about half an hour and the more complex dual switch was ready to go in about 45 minutes or so — and that was the first time I changed a light switch in a few years. If you’ve never done this before, though, that rats nest of cables behind your switches may take a little bit to figure out, but thankfully, all electric cables in modern homes should be color-coded.

One nice feature here is that you first install the backplate, which has physical buttons to let you test your installation before you put on the actual touchscreen unit. That way, you don’t have to unscrew everything in case you did make a mistake.

As for the software side, once you put on the screen, the Android -based interface should pop up within a few minutes. From there, you go through the usual Wi-Fi setup procedure and most likely a software update. After that, you should be ready to go.

Managing the lights that are directly attached to the control from the touchscreen or the capacitive strips on the side (for the two-switch control and up) is easy enough. Adding your third-party devices to the system takes a little while, but isn’t too onerous either, and you’re only going to do it once, after all.

I found the overall menu system a bit confusing, though, and takes a while to navigate. That especially becomes a problem when you want to program scenes (maybe to turn on all the different smart lights in your living room or bedroom). For this, you have to program both a scene that turns on all the lights, which take a few taps for every single one — and then a second scene that turns them all off. Because you can duplicate scenes, that second step is a bit faster, but I couldn’t help but think that there had to be a better solution for this. At the same time, though, this allows you to create pretty complex scenes. You can do most of this through the Brilliant app on your phone, too, which is probably the way to go as it’s a bit easier and faster.

Once everything is set up, though, the system is actually incredibly easy to use, and even your house guests who have never seen a smart plug will finally be able to turn your lights on and off (and yes, I’m aware that this shouldn’t be a problem in 2020, but here we are). I know it’s a bit of a cliche, but it pretty much just works.

One problem I’ve had with Brilliant is that the Controls are pricey, starting at $299 for the single switch and $349 for the dual switch. At those prices, you’re not going to put those into a lot of your rooms (unless you think that’s not that pricey, in which case, congrats). With the upcoming screen-less dimmer switches, which only require you to have a single control in your home and will retail for just under $70, that equation changes. We’ll give those new switches a try once they are available later this year.