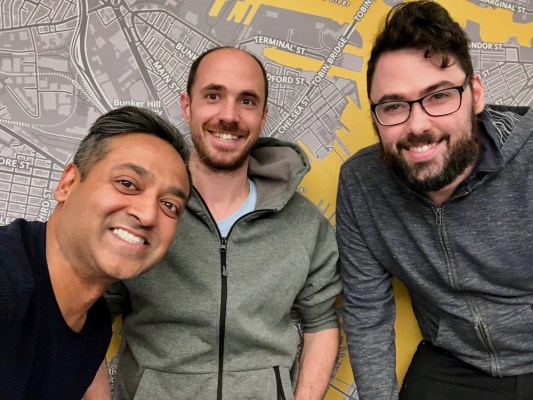 Just a couple days after mobile analytics and marketing company Localytics was acquired by Upland Software, two of its founders are announcing their new startup, Demand Sage.

CEO Raj Aggarwal and CTO Henry Cipolla previously co-founded and served in the same roles at Localytics, and they founded Demand Sage with Chief Product Officer Randy Dailey — whom Aggarwal described as the “perpetual all star” of the Localytics product team.

Aggarwal explained that the idea for Demand Sage emerged from their time at Localytics, where the team worked with large enterprises and used customer data to “refine their customer experience.” But he discovered that “even for a mid-sized company like ourselves, it was impossible, infeasible to take advantage of those same capabilities.”

At least, it was impossible in the past, but Aggarwal said the landscape has changed in ways that allow Demand Sage to now bring “the best of a large enterprise’s marketing intelligence capabilities to small and medium-sized companies,” (as he put it in a blog post introducing the company).

First, there’s cost. Aggarwal told me that while a smaller business can’t afford the “massive cost to cleanse and manipulate data,” many are now using online software that collects and structures the data for them, so Demand Sage can take advantage of that work.

“The problem is that the enterprise solutions are built in a way that requires customization or data manipulation as the first step to really understand what that data is,” he said. “That’s what makes it cost tens of thousands of dollars, often. That’s the first piece that we think we can eliminate immediately.”

Second, there’s the fact that marketers are increasingly creating their reports in Google Sheets, because of its flexibility. And third, Aggarwal said that while “the raw cost of computation has gone down,” the data remains “pretty difficult to access and challenging for a non-data scientist to use it.”

So Demand Sage was built to take advantage of and address these shifts. It initially plugs into HubSpot (with plans to integrate with other marketing platforms) and Google Sheets, automatically generating what Aggarwal said are “spreadsheets that are well-formatted and well structured” to highlight trends and anomalies that are relevant to marketers, which can then be used for “communicating those insights back into organizations.”

To be clear, we’re not talking about basic analytics data, but rather more nuanced analysis, the kind of thing that Dailey said smaller businesses struggled with in the past.

“We might ask them what factors influenced customer converting down the funnel, and they would say we don’t do that analysis,” Dailey said. “They often just left it on the cutting room floor.”

As for whether Demand Sage can perform this kind of analysis across different industries, Cipolla added, “Because the data is coming from a really opinionated API, typical data science tasks like anomaly detection and basic predictions should work for any industry.”