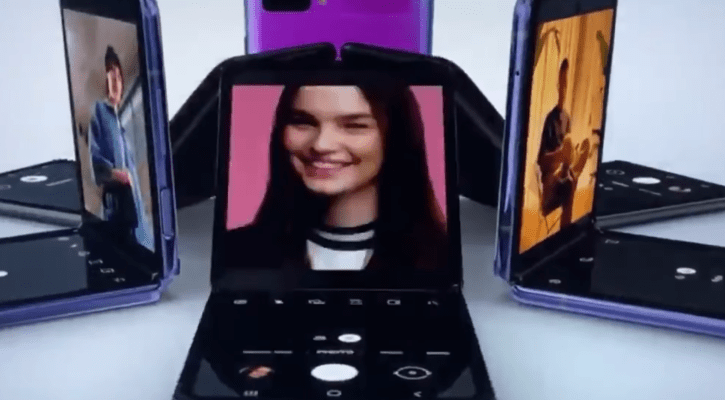 It was South Korea’s — rather than Netflix’s — night at the Oscars, thanks to Bong Joon-ho’s biting class satire Parasite, which won a well-deserved best picture gong.

But tech giant Samsung appears to have been hoping to steal a little of the national limelight: The Korean phone maker chose a prime Oscars ad slot to show off a 360-degree view of its next foldable, running it as a teaser for its Unpacked 2020 unboxing event — which takes place in San Francisco tomorrow.

The ad shows the flip phones from all angles, opening and closing while the Comic Strip sounds of Serge Gainsbourg and Brigitte Bardot pop and crackle in the background.

Notably we see the foldable propping itself up, with the screen half or three-quarters open, for a hands-free face-time style chat. (In case you were wondering what the point of a flip phone might be in 2020.)

There’s also an eye-popping iridescent purple colorway on show that seems intended to make the most of the screen-concealing clamshell design. A black version does a much better job of blending into the background.

While a brief side view of the phone shows what looks like a side-mounted fingerprint scanner — per earlier leaks.

And if you’re wondering how you’ll screen incoming calls when the clam is closed the ad shows a micro display that tells you the name of the person calling. tl;dr you can still ghost your frenemies while packing a flip.

We’ve seen renders of the Samsung Galaxy Z Flip leak online before but this is an official full view of the foldable Samsung hopes will spark a retro fashion craze for clamshell flip phones. (See also the rebooted Motorola Razr.)

Stay tuned for all the details from Samsung Unpacked 2020 as we get them (we’re especially keen to find out the price-tag for this foldable) — including our first look at the next flagship Galaxy S device.

TechCrunch’s intrepid hardware editor, Brian Heater, will be on the ground in San Francisco tomorrow to get hands on with all the new kit so you don’t have to.

Nothing’s second phone will take on the US this year
Apple execs on M2 chips, winning gamers and when to buy a Mac
Samsung has the MacBook Pro in its sights with the $2,400 Galaxy Book 3 Ultra
Apple’s hardware VP on the HomePod’s return
Fairphone nabs $53M in growth capital for ‘sustainable’ consumer electronics