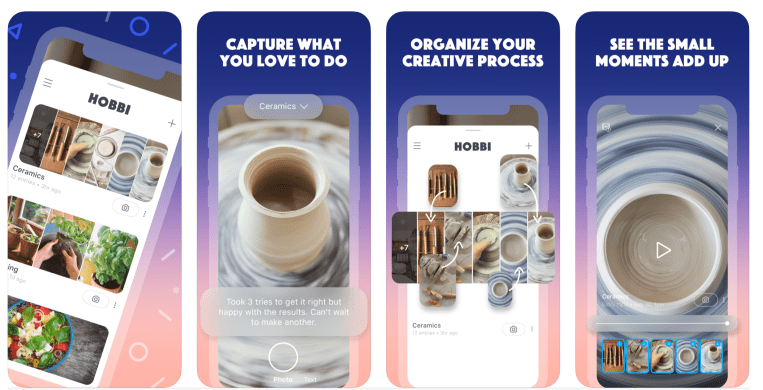 Facebook is adding another app to its group of experimental projects from the NPE Team, an initiative it announced last year focused on rapidly trying out new ideas in social to see how users react. This week, the team released its fourth app experiment with the launch of Hobbi, a photo and video sharing app designed for documenting your personal projects and hobbies.

Though Hobbi takes obvious cues from Pinterest, it’s not just a pinboard of inspirational ideas. Instead, the app is designed to help hobbyists organize photos of their own projects into themed collections — like gardening, cooking, arts & crafts, décor and more. The idea is to track the progress you’re making over time.

There’s not a social networking component to the app beyond being able to create video highlight reels you could share externally with friends after your projects are complete.

In that sense, Hobbi is more like an editor and organizer than any sort of new social network.

It’s also a very simple app with limited controls or editing options, compared with something like Instagram’s more robust Stories editor, for instance.

It’s interesting, however, that Hobbi’s launch follows shortly after that of Tangi, an app from Google’s Area 120 incubator also focused on creativity, hobbies, and DIY content. Arguably Tangi is a different type of app, as it’s designed around short-form video — similar to a curated TikTok for DIY. But for both companies to launch experiments in the DIY space signals that’s an area where there’s potential to still carve out a niche, despite Pinterest’s domination as a home for hobbies, projects, and interests.

Facebook so far has launched just a handful of NPE Team-branded apps. In November, it launched a chat app for making friends called Bump and a social music app Aux. Its first experiment, a meme editor called Whale, has already shut down, however.

Facebook so far has declined to comment on its plans for any individual NPE Team app, pointing back to its original announcement that said availability would depend on the app. The company had also said the experiments in many cases would be short-lived, as the NPE Team will shut down apps that people don’t find useful and then move on to create others.

Hobbi became available as of yesterday on iOS only. We were able to download it in the U.S. but it’s also available in Columbia, Belgium, Spain, and Ukraine.