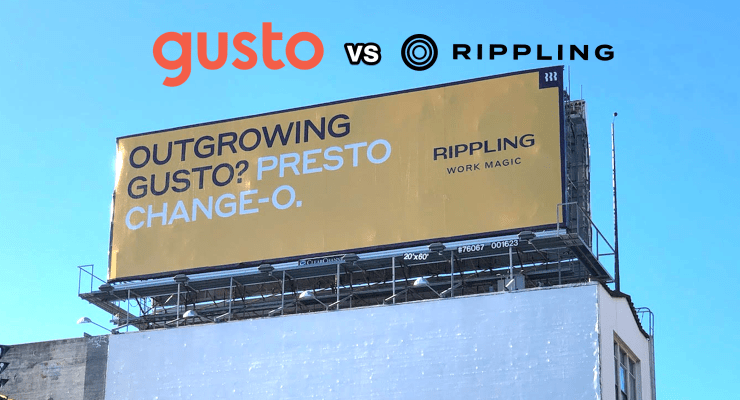 The problem is, Gusto got it taken down by issuing a cease & desist order to Rippling and the billboard operator Clear Channel Outdoor. That’s despite the law typically allowing comparative advertising as long as it’s accurate. Gusto sells HR, benefits and payroll software, while Rippling does the same but adds in IT management to tie together an employee identity platform.

Rippling tells me that outgrowing Gusto is the top reasons customers say they’re switching to Rippling. Gusto’s customer stories page lists no customers larger than 61 customers, and Enlyft research says the company is most often used by 10 to 50-person staffs. “We were one of Gusto’s largest customers when we left the platform last year. They were very open about the fact that the product didn’t work for businesses of our size. We moved to Rippling last fall and have been extremely happy with it,” says Compass Coffee co-founder Michael Haft.

That all suggests the Rippling ad’s claim is reasonable. But the C&D claims that “Gusto counts as customers multiple companies with 100 or more employees and does not state the businesses will ‘outgrow’ their platfrom at a certain size.”

In an email to staff provided to TechCrunch, Rippling CMO Matt Epstein wrote, “We take legal claims seriously, but this one doesn’t pass the laugh test. As Gusto says all over their website, they focus on small businesses.”

So rather than taking Gusto to court or trying to change Clear Channel’s mind, Conrad and Rippling did something cheeky. They responded to the cease & desist order in Shakespeare-style iambic pentameter.

Our billboard struck a nerve, it seems. And so you phoned your legal teams,
who started shouting, “Cease!” “Desist!” and other threats too long to list.

Your brand is known for being chill. So this just seems like overkill.
But since you think we’ve been unfair, we’d really like to clear the air.

Rippling’s general counsel Vanessa Wu wrote the letter, which goes on to claim that “When Gusto tried to scale itself, we saw what you took off the shelf. Your software fell a little short. You needed Workday for support,” asserting that Gusto’s own HR tool couldn’t handle its 1,000-plus employees and needed to turn to a bigger enterprise vendor. The letter concludes with the implication that Gusto should drop the cease-and-desist, and instead compete on merit:

So Gusto, do not fear our sign. Our mission and our goals align.
Let’s keep this conflict dignified—and let the customers decide.

Rippling CMO Matt Epstein tells me that “While the folks across the street may find competition upsetting, customers win when companies push each other to do better. We hope our lighthearted poem gets this debate back down to earth, and we look forward to competing in the marketplace.”

Rippling might think this whole thing was slick or funny, but it comes off a bit lame and try-hard. These are far from 8 Mile-worthy battle rhymes. If it really wanted to let customers decide, it could have just accepted the C&D and moved on…or not run the billboard at all. It still has four others that don’t slam competitors running. That said, Gusto does look petty trying to block the billboard and hide that it’s unequipped to support massive teams.

We reached out to Gusto over the weekend and again today asking for comment, whether it will drop the C&D, if it’s trying to get Rippling’s bus ads dropped too and if it does in fact use Workday internally.

[Update 2pm Pacific: Gusto’s PR representative Paul Loeffler claims that “This is common business practice in maintaining a brand”, says that for Gusto “A core, but not exclusive focus, are small businesses”, and admits that “as Gusto itself has grown to become a large-scale company, we have different needs than many of our customers and transitioned to Workday.”

Finally, he declares that “We’re excited to see more companies create new solutions that make it easier for businesses to take care of and support their teams” despite theatening to sue one that was. If Gusto itself grew out of Gusto, an ad asking if its customers are too seems wholly accurate.]

Given Gusto has raised $516 million — 10X what Rippling has — you’d think it could just outspend Rippling on advertising or invest in building the enterprise HR tools so customers really couldn’t outgrow it. They’re both Y Combinator companies with Kleiner Perkins as a major investor (conflict of interest?), so perhaps they can still bury the hatchet.

At least they found a way to make the HR industry interesting for an afternoon.

Plum launches its money management app in five more countries
Critical Role’s second campaign will get its own Amazon animated series
Being the steady hand in market uncertainty with Sebastian Siemiatkowski from Klarna
Qiara is a new home security service for the French market
This startup hopes to take on Canva, raising an $11.6M Series A for its design platform