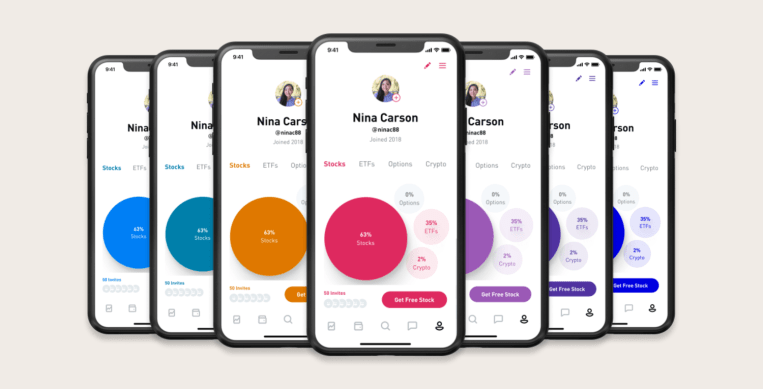 Before it was worth $7.6 billion, the original idea for Robinhood was a stock trading social network. At my kitchen table in San Francisco in 2013, the founders envisioned an app for sharing hot tips to a feed complete with a leaderboard of whose predictions were most accurate. Once they had SEC approval, they pivoted towards the real money maker: letting people buy and sell stocks in the app, and pay to borrow cash to do so.

Now seven years later, Robinhood is subtly taking the first steps back to its start. Today it’s launching Profiles. For now, they let users see analytics about their portfolio like how concentrated they are in stocks vs options vs cryptocurrency, as well across different business sectors. Complete with usernames and a photo, Profiles let you follow self-made or Robinhood provided lists of stocks and other assets.

Profiles could give Robinhood’s customers the confidence to trade more, and create a sense of lock-in that stop them from straying to other brokerages that have dropped their per trade fees to zero to match the startup, like Charles Schwab, Ameritrade, and ETrade that was acquired for $13 billion today by Morgan Stanley.

The Profile features certainly sound helpful. They could reveal that your portfiolio is to centered around Tech, Media, and Telecom stocks, or that you’re ignoring cryptocurrency or corporations from your home state. Lists also makes it easier to track specific business verticals, save stocks to buy when you have the cash, or set aside some for deeper research. Robinhood pulls info from FactSet, Morningstar, and other trusted sources to figure out which stocks and ETFs go into sector lists. Profiles and lists begin to roll out to all users next week.

But what’s most interesting is how profiles lay the foundation for Robinhood as a social network. It’s easy to imagine letting users follow other accounts or lists they create. Instead of having to have an expensive financial advisor or enough cash to qualify for one with a different brokerage, Robinhood could let you crowdsource advice.

Robinhood would certainly need to be careful about scammy tips going viral. But embracing social could leverage one of its strongest assets: the youthfulness of its userbase. Most online brokerages are somewhat undifferentiated beyond differences in pricing. Unsatisfied users could bail for a competitor at any time. But Robinhood’s users are accustomed to social networking and the way it locks in users since they don’t want to abandon their community.

When I asked Robinhood Profiles’ product manager Shanthi Shanmugam directly about whether this was the start of more social trading features, they suspiciously dodged the question, telling me “When thinking about how to reflect who you are as an investor, we looked at how other apps represent you and it felt natural to leverage a design that felt more like a profile. When helping people group their investment ideas, it was easy to envision this as a playlist you might find on your favorite music app.”