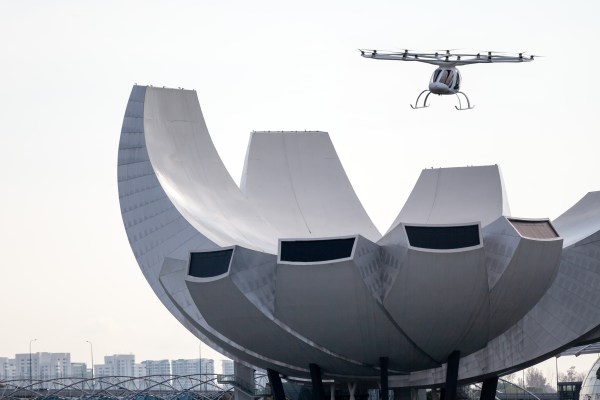 Autonomous air mobility company Volocopter has added to the Series C funding round it announced in September 2019. The German electric vertical take-off and landing (eVTOL) aircraft maker announced €50 million ($54 million at today’s exchange rate) in funding at the time, and the C round has now grown to €87 million ($94 million) thanks to new lead investor DB Schenker, a German logistics company with operations all over the world.

This round also includes participation by Mitsui Sumitomo Insurance Group, as well as the venture arm of its parent MS&AD, along with TransLink Capital . Existing investors including Lukasz Gadowski and btov also participated in this round extension.

With this new funding, Volocopter brings its total around $132 million, and it says it will use the newly acquired capital to help certify its VoloCity aircraft, its air taxi eVTOL designed to transport people, which is on track to become the company’s first ever vehicle licensed for commercial operation. Meanwhile, Volocopte will also use the new funds to help continue development of a next-generation iteration of its VoloDrone, which is the cargo-carrying version of its aircraft. It aims to use VoloDrone to expand its market to include logistics, as well as construction, city infrastructure and agriculture.

Already, Volocopter has formed partnerships with companies including John Deere for pilots of its VoloDrone, but it says that a second-generation version of the vehicle will help it commercialize the drone. On the VoloCity side, the company recently flew a demonstration flight in Singapore, and then announced that they’d be working with Grab on a feasibility study about air taxi services for potential deployment across Southeast Asia in key cities.

Alongside this round extension, Volocopter adds two advisory board members – Yifan Li from Geely Holding Group, which led the first tranche of this round closed in September, and DB Schenker CEO Jochen Thewes. Both of these are key strategic partners from investors who stand to benefit the company a lot not only in terms of funding, but also in terms of supply-side and commercialization.