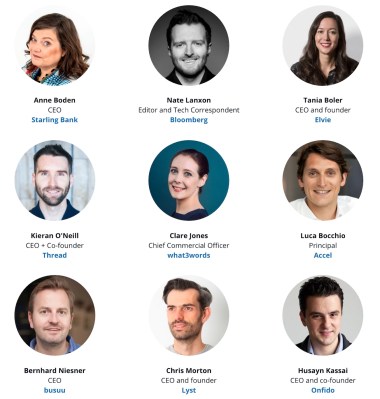 Excitement for The Europas Awards for European Tech Startups is hotting up. Here are the first wave of speakers and judges — and more are coming!

The Awards – which have been running for over 10 years – will be held on 25 June 2020 in London, U.K. on the front lawn of the Geffrye Museum in Hoxton, London — creating a fantastic and fun garden party atmosphere in the heart of London’s tech startup scene.

TechCrunch is once more the exclusive media sponsor of the awards and conference, alongside The Pathfounder.

The application form to enter is here.

We’re scouting for the top late-stage seed and Series A startups in 22 categories.

You can nominate a startup, accelerator or venture investor that you think deserves to be recognized for their achievements in the last 12 months.

For the 2020 awards, we’ve overhauled the categories to a set that we believe better reflects the range of innovation, diversity and ambition we see in the European startups being built and launched today. This year we are particularly looking at startups that are able to address the SDGs/Globals Boals.

But the key to it is that there are no “off-limits areas” at The Europas, so attendees can mingle easily with VIPs.

Timeline of The Europas Awards deadlines:

We’re also shaking up the awards dinner itself. There are more opportunities to network. Our awards ceremony this year will be in the setting of a garden lawn party, where you’ll be able to meet and mingle more easily, with free-flowing drinks and a wide selection of street food (including vegetarian/vegan). The ceremony itself will last less than 45 minutes, with the rest of the time dedicated to networking. If you’d like to talk about sponsoring or exhibiting, please contact Claire Dobson on [email protected]

Instead of thousands and thousands of people, think of a great summer event with the most interesting and useful people in the industry, including key investors and leading entrepreneurs.

The Europas Awards have been going for the last 10 years, and we’re the only independent and editorially driven event to recognise the European tech startup scene. The winners have been featured in Reuters, Bloomberg, VentureBeat, Forbes, Tech.eu, The Memo, Smart Company, CNET, many others — and of course, TechCrunch.

• No secret VIP rooms, which means you get to interact with the speakers

The Pathfounder Afternoon Workshops
In the afternoon prior to the awards we will be holding a special, premium content event, The PathFounder, designed be a “fast download” into the London tech scene for European founders looking to raise money or re-locate to London. Sessions include “How to Craft Your Story”; “Term Sheets”; “Building a Shareholding Structure”; Investor Panel; Meet the Press; and a session from former Europas winners. Followed by the awards and after-party!

The Europas “Diversity Pass”
We’d like to encourage more diversity in tech! That’s why we’ve set aside a block of free tickets to ensure that pre-seed female and BAME founders are represented at The Europas. This limited tranche of free tickets ensures that we include more women and people of colour who are specifically “pre-seed” or “seed-stage” tech startup founders. If you are a women/BAME founder, apply here for a chance to be considered for one of the limited free diversity passes to the event.

Meet the first set of our 20 speakers and judges:

Anne Boden
CEO
Starling Bank
Anne Boden is founder and CEO of Starling Bank, a fast-growing UK digital bank targeting millions of users who live their lives on their phones. After a distinguished career in senior leadership at some of the world’s best-known financial heavyweights, she set out to build her own mobile bank from scratch in 2014. Today, Starling has opened more than one million current accounts for individuals and small businesses and raised hundreds of millions of pounds in backing. Anne was awarded an MBE for services to financial technology in 2018.

Nate Lanxon (Speaker)
Editor and Tech Correspondent
Bloomberg
Nate is an editor and tech correspondent for Bloomberg, based in London. For over a decade, he has particularly focussed on the consumer technology sector, and the trends shaping the global industry. Previous to this, he was Senior Editor at Bloomberg Media and was head of digital editorial for Bloomberg.com in Europe, the Middle East and Africa. Nate had held numerous roles across the most respected titles in tech, including stints as editor of WIRED.co.uk, Editor-in-Chief of Ars Technica UK, and Senior Editor at CBS-owned CNET. Nate launched his professional career as a journalist by founding a small tech and gaming website called Tech’s Message, which is now the name of his weekly technology podcast hosted at natelanxon.com.

Kieran O’Neill
CEO + Co-founder
Thread
Thread makes it easy for guys to dress well. They combine expert stylists with powerful AI to recommend the perfect clothes for each person. Thread is used by over 1 million men in the UK, and has raised $35m from top investors including Balderton Capital, the founders of DeepMind, and the billionaire former owner of Warner Music. Prior to Thread, Kieran founded one of the first video sharing websites aged 15 and sold it for $1.25M aged 19. He was then CEO and co-founder of Playfire, the largest social network for gamers, which he grew to 1.5 million customers before being acquired in 2012. He’s a member of the Forbes, Drapers and Financial Times 30 Under 30 lists.

Clare Jones
Chief Commercial Officer
what3words
Clare is the Chief Commercial Officer of what3words; prior to this, her background was in the development and growth of social enterprises and in impact investment. Clare was featured in the 2019 Forbes 30 under 30 list for technology and is involved with London companies tackling social/environmental challenges. Clare also volunteers with the Streetlink project, doing health outreach work with vulnerable women in South London.

Luca Bocchio
Principal
Accel
Luca Bocchio joined Accel in 2018 and focuses on consumer internet, fintech, and software businesses. Luca led Accel’s investment in Luko, Bryter and Brumbrum. Luca also helped lead Accel’s investment and ongoing work in Sennder. Prior to Accel, Luca was with H14, where he invested in global early and growth stage opportunities, such as Deliveroo, GetYourGuide, Flixbus, SumUp, and SecretEscapes. Luca previously advised technology, industrial, and consumer companies on strategy with Bain & Co. in Europe and Asia. Luca is from Italy and graduated from LIUC University.

Bernhard Niesner
CEO
busuu
Bernhard Niesner, Co-Founder and CEO, Busuu
Bernhard co-founded Busuu in 2008 following an MBA project and has since led the company to become the world’s largest community for language learning, with more than 90 million users across the globe. Before starting Busuu, Bernhard worked as a consultant at Roland Berger Strategy Consultants. He graduated summa cum laude in International Business from the Vienna University of Economics and Business and holds an MBA with honours from IE Business School. Bernhard is an active mentor and business angel in the startup community and an advisor to the Austrian Government on education affairs. Bernhard recently received the ‘EY Entrepreneur Of The Year 2018 UK Awards’ in the ‘Disruptor’ category.

Chris Morton
CEO and founder
Lyst
Chris is the founder and CEO of Lyst, the world’s biggest fashion search platform used by 104 million shoppers each year. Including over 6 million products from brands including Burberry, Fendi, Gucci, Prada and Saint Laurent, Lyst offers shoppers convenience and unparalleled choice in one place. Launched in London in 2010, Lyst’s investors include LVMH, 14W, Balderton and Accel Partners. Prior to founding Lyst, Chris was an investor at Benchmark Capital and Balderton Capital in London, focusing on the early-stage consumer internet space. He holds an MA in Physics and Philosophy from Cambridge University.

Husayn Kassai
CEO and co-founder
Onfido
Husayn Kassai is the Onfido CEO and Co-Founder. Onfido helps businesses digitally onboard users by verifying any government ID and comparing it with the person’s facial biometrics. Founded in 2012, Onfido has grown to a team of 300 across SF, NYC and London; received over $100m in funding from Salesforce, Microsoft and others; and works with over 1,500 fintech, banking and marketplace clients globally. Husayn is a WEF Tech Pioneer; a Forbes Contributor; and Forbes’ “30 Under 30”. He has a BA in Economics and Management from Keble College, Oxford.

Is your startup heading to MWC? TechCrunch wants to hear from you
$500M in, GV gears up for more deals in Europe with a new partner in London, Luna Dai Schmid
AI-generated ‘Seinfeld’ suspended on Twitch for AI-generated transphobic jokes
EU lawmakers launch tips hotline to catch Big Tech’s ‘shady’ lobbying
Addressable raises $7.5M to match crypto wallets to Twitter accounts. But how?