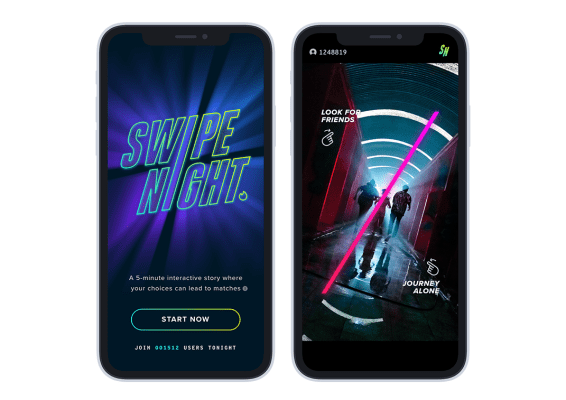 Following a successful debut for Tinder’s first foray into original content, the company is giving its interactive video series “Swipe Night” another run. The company confirmed today it’s renewing “Swipe Night” for a second season that will launch this summer, again as an in-app experience within Tinder’s dating app.

“Swipe Night,” as you may recall, first launched in October 2019 within Tinder. The experience introduced a first-person adventure played in-app, where users would make choices at key turning points to progress the narrative — like a choose-your-own-adventure story.

The series was designed to increase user engagement and help the app’s young users better connect.

Today, half of Tinder is Gen Z (ages 18-25) — a demographic that’s embracing their single lifestyle and more casual relationships compared with those on other dating apps, like Tinder parent company Match, for example, or its newer acquisition Hinge. These younger users connected with the idea of starting conversations based on a shared experience, says Tinder.

However, the reality is that “Swipe Night” had also arrived at a time when users were opening Tinder’s app less on a daily basis, even as monthly usage climbed. Though “Swipe Night” only ran on specific dates in October 2019, users’ choices within the interactive experience were added to their profiles. This allowed users to see who else agreed with their decisions and who took the opposite path. That made launching Tinder and swiping through profiles more compelling — even for those who may have been tiring Tinder before the series’ arrival.

The experiment worked. Tinder said millions of users tuned in to “Swipe Night” and matches and conversations increased by 26% and 12%, respectively. With “Swipe Night,” it seemed, Tinder finally gave users something to talk about.

The returning second season of “Swipe Night” will again be directed by Karena Evans, who directed Coldplay’s music video “Everyday Life” and Drake’s “In My Feelings” and “God’s Plan.” This time, it will be written by Jessica Stickles (“Portlandia,” “Another Period”) and Julie Sharbutt (“3 Days”).

“Working on Swipe Night was such a fulfilling experience for me. I got to do something that had never been done before and innovate with storytelling to bring a generation of people together. I’m in search of projects that impact, shift or curate a culture and couldn’t be more excited to return for more,” said Evans, in a statement.

“Swipe Night’s” second season may see Tinder tweaking the formula a bit, and may even introduce new mechanics to keep it feeling fresh.

In addition to the Season 2 launching in the U.S., Match previously confirmed that 10 international markets across Europe and Asia will get “Swipe Night” this year. Tinder said today that Season 1 would be launching internationally on March 14th, but declined to say when those users would receive Season 2.