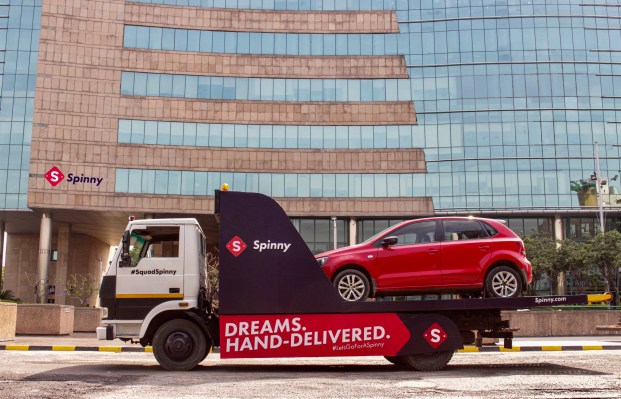 Spinny, an online platform for selling used cars, has secured $43.7 million from a cohort of influential investors in a new financing round as it looks to expand to more Indian cities.

The Series B financing round for the Gurgaon-based startup was led by the Fundamentum Partnership, the growth-capital fund backed by tech veterans Nandan Nilekani and Sanjeev Aggarwal. US-based General Catalyst Partners, Korea based KB Financial Group and existing investors Accel, SAIF Partners and Alteria Capital also participated in the round.

The four-year-old startup has raised about $57 million to date, and according to a person familiar with the matter, the new round gave it a post money valuation of about $150 million.

Spinny runs a platform to facilitate sale and purchase of used cars. Niraj Singh, co-founder and chief executive of the startup, told TechCrunch in an interview that Spinny brings the trust factor that people are looking for when they are purchasing a car.

“Most of these people are aged under 35. They are aspirational and want to get better cars. But it’s a hassle for them to find a trustworthy place and deal with agents,” he said.

The Gurgaon-based four-year-old startup is solving that by inspecting and purchasing the cars and then selling them itself.

“Since there is no middlemen, we are able to sell the cars at more affordable prices and we offer a five-day, no-question asked full-refund if someone is not satisfied with their purchase. On top of that, we also offer a year-long warranty on these cars,” he said.

Spinny operates in four cities in India today and has sold nearly 10,000 cars. Until 2017, the startup acted as a marketplace for sale and purchase of cars, essentially serving as a listing platform. “Then, we pivoted as we wanted to control the full supply chain,” he said.

Nandan Nilekani, co-founder and Chairman of Fundamentum said, the fund was impressed by Spinny’s “full stack business” that is building a competitive differentiation as it scales.

“This fits into Fundamentum’s thesis of backing long term oriented entrepreneurs to solve complex business problems using technology and who aspire to build a company at scale and to last,” he said.

On Spinny’s website, people can find the car they want to purchase and then inspect and test drive it from the startup’s physical hubs. Spinny currently has nine hubs in India, something it plans to scale to 20 by the end of the year as it scales to more cities in the country.

It competes with heavily-backed Cars24 and CarDekho, both of which count Sequoia Capital as an investor, as well as Droom, which has raised over $130 million, and Naspers-owned marketplace Olx.

At stake is a huge opportunity. The market for used cars in India is estimated to grow from $13 billion to $25 billion by 2023, despite the slowdown in automobile industry in the country.