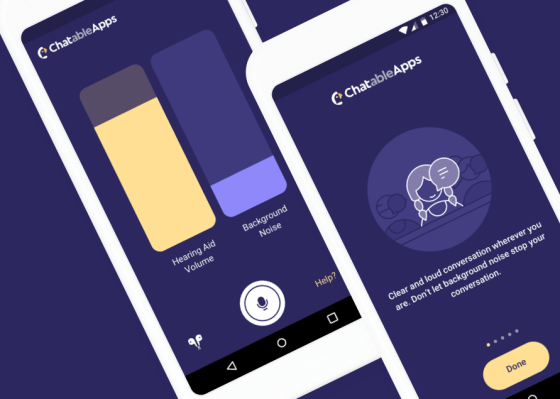 ChatableApps, a U.K. startup commercialising the work of auditory neural signal processing researcher Dr Andy Simpson, has quietly picked up seed backing from Mark Cuban. The company has built a smartphone app that provides hearing assistance by removing background noise in near real-time.

Alongside Simpson, the company’s co-founders are Brendan O’Driscoll, Aidan Sliney and George Boyle — the original team behind the music discovery app Soundwave (acquired by Spotify) — and later joined by CEO Giles Tongue, formerly of wearable tech startup NURVV, who has been tasked with taking the business forward.

“Dr Andy Simpson is our CSO [chief science officer] and inventor,” Tongue tells me. “He brings together the auditory neuroscience, auditory perception, neural signal processing and artificial Intelligence, is an AI maverick and contrarian thinker, and this unusual intersection are what has led to the creation of our proprietary ground up neuroscience-led AI. His prolific research had over 400 citations before he went into stealth mode”.

Since then the team have been busy (although largely flying under the radar). Chatable’s hearing assistant app is available in the Play Store in open beta but is still considered “pre-launch”.

“We’re in a constant cycle of pre-clinical validation, which is going amazingly,” says Tongue. “We’ve heard ‘life changing,’ and had tears in the eyes… of early adopters”.

Chatable’s O’Driscoll says the company’s technology and approach is “completely unique,” as it doesn’t use noise filtering or other DSP techniques. “It’s actually a deep learning neural net approach to speech and noise separation that doesn’t apply filters to the original audio but rather it listens and re-prints a brand new audio stream in near real time which is a mimic of just the vocal components of the original audio,” he tells me.

Describing Chatable as a “click and go” universal hearing aid, O’Driscoll says the app has been engineered to work on any modern day £100 smartphone and with regular ear buds. “The app produces a clear and loud voice so is easy for the user to hear a conversation, and features two sliders, one to turn up volume, the other to control background noise,” he explains.

More broadly, Tongue believes the “global hearing epidemic” is the biggest health issue at scale that AI can solve, and that Chatable has an opportunity to help millions of people in a life changing way. According to the World Health Organisation there are 466 million people with disabling hearing loss. “I believe Chatable has the power to be the first app able to address a global health epidemic using an everyday smartphone,” he says.

Meanwhile, Chatable plans to generate revenue on a subscription basis, charging £9.99 per month. This is certainly designed to ensure the startup is sustainable and can continue to invest in its product for the long term (for example, an iPhone version of the app is currently in private beta. However, I hope the price can be brought down over time so that it becomes truly affordable to everybody that needs it.