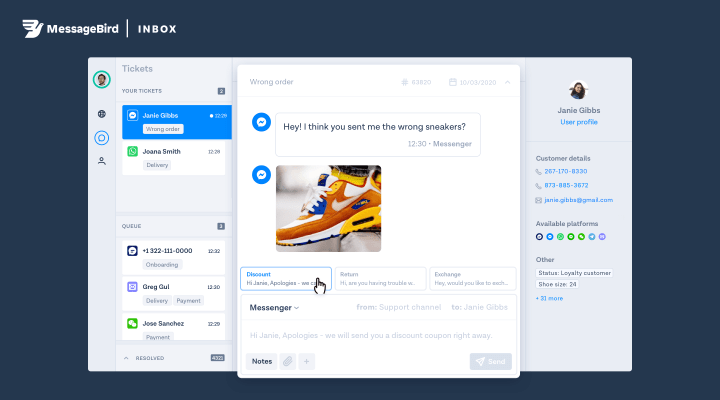 MessageBird, the Amsterdam-headquartered cloud communications platform backed by Accel in the U.S. and Europe’s Atomico, is unveiling another new product today, this time taking aim at the $350 billion customer service market.

Dubbed Inbox.ai and positioned as “Slack for external communications,” the new product — which is to be offered largely for free — enables customers to communicate with businesses via practically any channel of their choosing. This includes WhatsApp, SMS, Voice, Messenger, Instagram, WeChat, Apple Business Chat, RCS, Line and Telegram — in a bid to meet customers on their own digital, “messaging-first” turf. In terms of message content, at launch there is already support for text, images, video, geolocation and more.

And perhaps crucially, regardless of channel, incoming messages and customer conversations are presented in a single thread for easy ticketing and collaboration amongst support agents. There’s some built in intelligence, too, with “AI” promising to analyse keywords and anticipate customer needs, including providing a list of suggested replies. Agents can also drag and drop components to create auto-replies, and there’s support for things like automated NPS surveys, or rules for message routing.

As you’d expect from a company that has primarily targeted developers, Inbox.ai leverages webhooks for integration with various third-party tools used by enterprises and also comes pre-loaded with support for Shopify, Slack, Salesforce, Jira, and more. This includes the ability to have content created within Inbox.ai synced with other software used by a company for its various communication, sales and other business processes — even if over time, and for some companies, Inbox.ai may become all they need.

In a video call with MessageBird founder and CEO Robert Vis, he gave me a personal demo of Inbox.ai, including showing how quick the on-boarding process can be for a new business but also for a new customer. He had me WhatsApp a company’s support number and I could instantly see my message show up within the software and was able to send a photo to help with my request and receive other rich media in return.

Vis explained that the impetus for the new offering was his own frustration with customer support from companies in general, who, he says, haven’t adapted to the new world where customers expect to have their issues solved digitally and where it is no longer acceptable to queue for hours on hold or wait 24 hours or more for an email reply.

He says that a quick back of a napkin calculation suggests that, at the age of 35, he has already spent 2 weeks of his life on hold. He also said Inbox.ai wants to solve the continuity of support problem that typically sees customers having to re-explain their issue each time they are handed off to a different support agent or department.

“From a MessageBird perspective, we built these APIs and people [already] have the possibility to build these experiences, so why am I not living in this world?” Vis says rhetorically, after recalling a recent bad experience with his mobile telephone service provider. “I want to live in a world where I can text and have my problems easily solved… What I don’t want is for them to drop me a note into my email and then have to call them”.

So, rather than simply providing developer hooks and carrying out the infrastructure heavy-lifting, MessageBird is betting on its first user-facing product, which, I’m told, raised a few eyebrows amongst the board.

To that end, Vis told me that Inbox.ai was developed by the MessageBird team in 12 months and followed extensive research with customers, support agents and managers. Prior to launch, the software has been tested and is currently used by, HelloFresh and Deliveroo in Europe, Zilingo in Asia, and Join Buggy and Tix Telecom in Latin America.

Challenged on why nobody has really cracked this problem so far, despite a number of attempts to create a single source of customer support “truth,” Vis told me “everybody is talking about it but nobody is doing it”. That’s because you need to understand and then solve three related and difficult problems.

The first is ingesting data from all the various communication channels, for which MessageBird has previous form. The second is “experience generation”: the ability for support agents to easily communicate via rich experiences, such as images, videos, geolocation, tracking codes, discounts etc. That’s something most companies don’t have the developer resources to create, argues Vis. And thirdly is the UI, which has to allow agents to communicate and track tickets seamlessly across channels in a way that is agnostic to where those messages originate from.

“I think this is a new category, I think this is where things converge together,” adds the MessageBird CEO. “We compete with a lot of tools but we’re not any of them. We’re how we think in five years every tool is going to be”.

Review: The 2023 Mac Mini is a serious contender with the M2 Pro
Can Korean digital storytelling platforms captivate North American and European audiences?
Being the steady hand in market uncertainty with Sebastian Siemiatkowski from Klarna
This startup hopes to take on Canva, raising an $11.6M Series A for its design platform
Senate questions Live Nation president amid Taylor Swift ticketing debacle