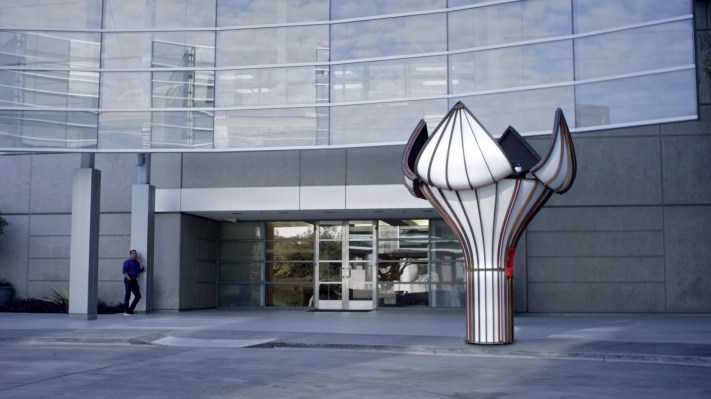 Drones making deliveries is of course the hot new hyperlocal tech play, but where are these futuristic aircraft supposed to land? On the lawn? Matternet has built a landing station for its cargo drones that looks less like a piece of infrastructure and more like a death ray from a ’60s sci-fi movie.

Far from the free-form delivery network envisioned by Prime Air or the like, Matternet’s drone deployments have been fixed point-to-point affairs focused on quickly connecting a handful of locations that frequently trade time-sensitive deliveries: hospitals.

The company has performed pilot tests in Switzerland and North Carolina, and just started a new one in San Diego, in which medical facilities are able to send blood samples, medications and (soon, one hopes) vaccines and other supplies back and forth without worrying about traffic or other complications on the ground.

But there’s the problem of where exactly the drones land, and what happens afterwards. Does someone have to swap out the battery? Who says when it’s safe to approach the drone, and how to detach its payload? Whatever the process is, it could probably be easier and more automated, and that’s what the station aims to accomplish.

With its techno-organic curves and flower-like hatch on top, the 10-foot-tall station seems to channel the likes of “Star Trek: The Original Series” and “Lost in Space,” and no doubt it’s intended to be eye-catching as well as functional.

When the drone arrives, the top opens and the drone lands right in the center, where it is enclosed and grasped by the station’s machinery, unburdened of its payload, and given a fresh battery. The payload is contained in the tower until it is called for by an authorized person, who scans a dongle to receive their package.

If there’s just the one drone, it can live in the top part, the bulb or whatever you’d call it, until it’s needed again. If there are multiple deliveries or drones, however, the one inside will leave and enter a holding pattern about 60 feet above, in an “imaginary donut.”

The station will get its first installation in the second quarter of this year, at one of Matternet’s existing customer hospitals. Presumably it will roll out more widely once this shakeout period ends.

You can see the full operation in the dramatization below: