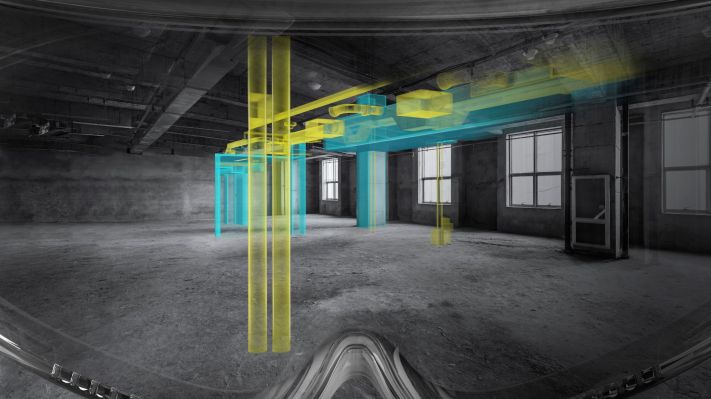 Augmented Reality technology did not, it turned out, light the touch paper on a booming new industry. What we got instead was a few cute applications on smartphones and devices like Microsoft’s Hololens, which has seen pretty limited success.

Where AR has proved that it may have a future is in industry, allowing workers to look at plans whilst they assemble something, for instance.

A new UK startup hopes to nudge that future on further with a radical new technology which, although it resembles the Hololens, is in fact a highly accurate helmet-mounted screen which enables construction workers to place beams or bricks in exactly the right locations, thus introducing significant savings in time normally lost due to mistakes.

To further boost its efforts, XYZ Reality has closed a £5 million Series A funding round, led by Amadeus Capital Partners and Hoxton Ventures, with participation from Adara Ventures and J Coffey Construction. The company will build out its AR cloud and software platform and build its team to serve the EU market and expand to US and Asia.

The idea behind it is highly innovative. A dedicated helmet with an attached visor projects a highly accurate hologram — based on laser positioning — in front of the wearer’s face, allowing them to place objects precisely according to plans projected in front of their eyes.

The problem it’s solving is an age-old one. In today’s construction industry buildings are designed in 3D and then converted into 2D drawings. But tradespeople are asked to interpret those 2D drawings and turn them into 3D buildings within construction “tolerances”. This process creates inefficiencies that mean up to 80% of the construction being “out-of-tolerance”. It’s estimated that 7-11% of project costs are wasted this way and, of course, in mega-projects like huge bridges, this amounts to an average of over $100 million.

Founder, CEO and builder David Mitchell, who has spent his career in the construction industry, says: “Works are currently validated after the fact through laser scanning. But 80% of the time the construction fails to meet acceptable tolerances. With HoloSite, we can prevent errors happening in the first place.”

Mitchell came up with the idea of eliminating 2D designs after the 2008 recession devastated the industry.

I tried out the headset for myself and found that I could complete a basic assembly of bricks according to the plans projected in front of my eyes with a reasonable degree of accuracy, from scratch.

XYZ says it was possible to build a bathroom in two hours using the headset, versus a day without it, using the technology.

The hope is that that as this technology improves, any tradesperson would be able to work on a construction site with less need for training in 2D plans, but still with a high degree of accuracy.

The project is not without risk. Daqri, which built enterprise-grade AR headsets for construction, shuttered its HQ last year. Earlier, Osterhout Design Group unloaded its AR glasses patents after acquisition talks with Magic Leap, Facebook and others stalled. Meta, an AR headset startup that raised $73 million from VCs, including Tencent, also sold its assets earlier this year after the company ran out of cash.

But Amadeus is bullish. Nick Kingsbury, Partner, Amadeus Capital Partners said: “Construction is a sector that’s ripe for radical innovation. This technology has the potential to revolutionize how the construction industry sets out and validates its work, reducing costs and the chance of project slippage from mistakes.”

European banks struggle with AI, while US banks lead the field, according to a new index
Substack introduces ‘private Substacks’ that readers can request to subscribe to
Madrid selects Dott, Lime and Tier for scooter licenses
Netflix teams up with Bumble so users can bond over popular TV shows
Disney+ advertisers will soon get Hulu’s ad targeting capabilities