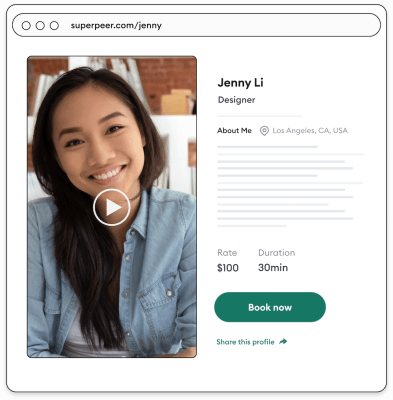 Superpeer is giving YouTube creators and other experts a new way to make money.

The idea is that if you’re watching a video to learn how to paint, or how to code, or about whatever the topic might be, there’s a good chance you have follow-up questions — maybe a lot of them. Ditto if you follow someone on Twitter, or read their blog posts, to learn more about a specific subject.

Now you could try to submit a question or two via tweet or comment section, but you’re probably not going to get any in-depth interaction — and that’s if they respond. You could also try to schedule a “Can I pick your brain?”-type coffee meeting, but again, the odds aren’t in your favor, particularly when it comes to picking the brain of someone famous or highly in-demand.

With Superpeer, experts who are interested in sharing their knowledge can do so via remote, one-on-one video calls. They upload an intro video, the times that they want to be available for calls and how much they want to charge for their time. Then Superpeer handles the appointments (integrating directly with the expert’s calendar), the calls and the payments, adding a 15% fee on top.

So a YouTube creator could start adding a message at the end of their videos directing fans who want to learn more to their Superpeer page. And if you’re a founder who wants to talk to an experienced designer, executive coach, product manager, marketing/sales expert, VC or other founder, you could start with this list.

To address this, co-founder and CEO Devrim Yasar (who previously founded collaborative programming startup Koding) said the company has created a user rating system, as well as a way to ask for a refund if you feel that a call violated the terms of service — the calls will be recorded and stored for 48 hours for this purpose.

Superpeer launched in private beta two weeks ago, and Yasar said the startup already has more than 100 Superpeers signed up.