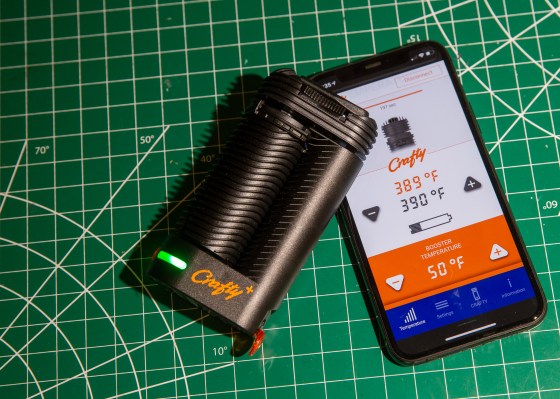 Users of Storz & Bickel’s vaporizers can once again connect their vapes to iPhones. The company’s solution comes several months after Apple enacted a ban on apps for tobacco and cannabis vaporizers. This time around, Storz & Bickel turned to a web app to provide iPhone users with expanded controls over their vapes.

I found the process straightforward and requiring just a few more steps than installing a traditional app. First, using the right browser, navigate to Storz-Bickel.com and click the link on the home page. Press the Connect button and load the device. From there the web app works as advertised, providing access to temperature control and different settings on two of Storz & Bickel’s vapes.

Right now, Storz & Bickel’s web app features most of the functionality of the company’s Android app. Peter Popplewell, Canopy Growth’s CTO, tells TechCrunch more functions are coming, including the ability to update firmware. The company will soon roll out similar web apps to other products like Juju Joints.

The web app requires the use of specific third-party browsers as Safari and Chrome lacks a critical function. Users need to install a browser that supports Bluetooth connections. Storz & Bickel recommends iPhone owners us Bluefy or WebBLE.

In my testing, I used the free Bluefy browser. The connection was reliable and easy to use. The experience isn’t as seamless as an app, but this solution is the only way to restore the features lost after Apple pulled the company’s app from the App Store.

Banned iOS apps like these from Storz & Bickel give users more control and transparency into consuming cannabis. Some allow users to fine-tuning temperature to control dosage amounts. A few vape apps display detailed lab reports around the contents of pre-packaged cartridges, offering the consumer protections against harmful chemicals.

This ban came after illicit vaping products caused a public health crisis. In response, Apple institute a complete removal on vaping apps rather than filtering apps from legitimate companies like Canopy Growth, Pax, and others. Now, six months after the ban, these companies are turning out workarounds to restore advertised functions disabled by Apple’s ban.