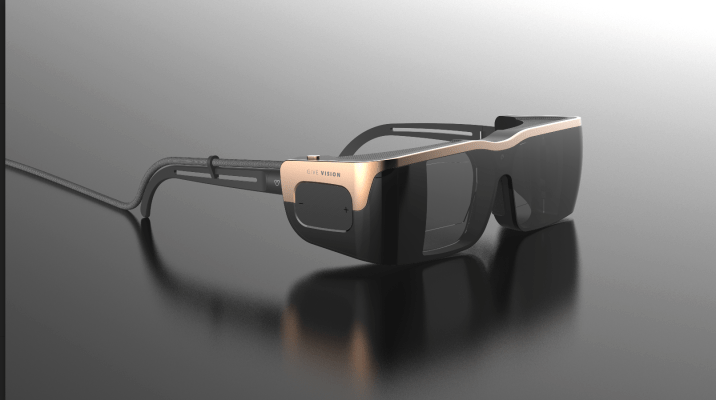 GiveVision, the U.K. startup creating wearable technology to help “restore” sight to people with visual impairments, is partnering with Sony (via the Sony UK Technology Centre) to develop and manufacture its next generation device.

Specifically, GiveVision says it will be working with Sony UK Tec to help bring to market a new, lightweight version of the startup’s “SightPlus” device. This will including condensing its existing “vision enhancing” technology into a single pair of glasses. The idea is to make it a lot more practical and less socially awkward for the person wearing the device.

“The collaboration with Sony will add to the expertise of the existing GiveVision team, and provide world leading technology expertise around camera, display and smartphone innovation, as well as a global manufacturing footprint,” says GiveVision.

As part of the collaboration, GiveVision will be relocating its design office to the Sony UK Tec facility in Wales in the U.K. To date, GiveVision has received support from Telefonica, Pfizer and the NHS.

GiveVision CEO Stan Karpenko tells me that around 1 in 3 people lose their sight by the age of 65 to conditions such as age-related macular degeneration or diabetic retinopathy. And that for those affected, there is currently no cure and very few options to restore vision.

“Those that have been affected suffer immensely every single day,” he says. “But with better ‘tools’ we can make them suffer less. We can help them to be more independent which will improve their quality of life significantly.

“At GiveVision we have developed a pair of electronic glasses that helps patients with even the most severe cases of un-curable sight loss to see clearly again by projecting a video of real-world into the working part of the retina”.

To that end, a recent study by Moorfields Eye Hospital found that almost 70% of users of the SightPlus prototype device reported that their visual acuity was enhanced to 0.2 logMAR or better, which I’m told is close to a normal level of vision.

“59 out of the 60 trial participants (98%) found that SightPlus improved their visual acuity by an average of six lines on a sight test chart (31 EDTRS letters or 0.6 logMar),” says the startup.

However, one of the biggest challenges that needed to be overcome is distilling the tech down to something that is actually wearable and still works. Consumer VR headsets not only remain quite bulky and heavy but they don’t provide a wide enough field of view to enable a visually impaired person to see.

“This is why this partnership with Sony is so important,” adds Karpenko. “We can manufacture a medical device that has 100 degree-plus field of view, and that actually works for the visually impaired, while looking like a pair of designer shades!”.