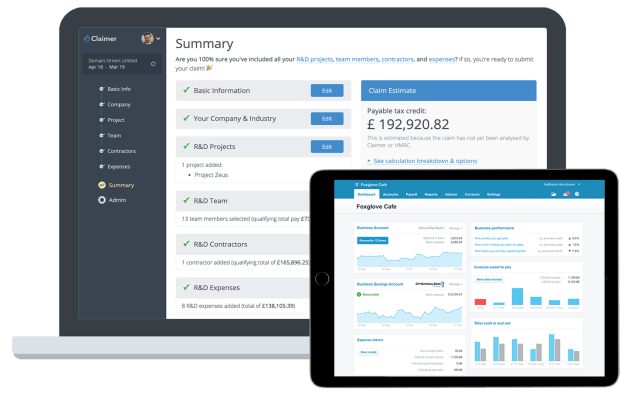 Claimer, a London-based startup that makes it easy for companies to claim R&D tax credits in the U.K., has raised £300,000 in seed funding.

Backing the already revenue-generating company is Ben Holmes (who was previously at Index Ventures), Nick Telson and Andrew Webster (the founders of DesignMyNight, which recently exited), Rupert Loman (founder of Gamer Network), and TrueSight Ventures.

Founded by Adam McCann in January 2018 and then launched in April 2019, Claimer streamlines the process of claiming R&D tax credits, which is a U.K. government subsidy popular with tech startups that is designed to encourage innovation. The startup claims its product is approximately 10x faster and up to 6x cheaper than using a tax consultant.

“Claimer is fixing the R&D tax relief space with tech,” McCann tells me. “If you’re not familiar with the scheme, it’s run by HMRC and allows U.K. businesses to claim back up to 33% of their research & development costs as a cash payment in any industry, such as software and hardware development, manufacturing, textiles, biotechnology, foodtech, and many others.

“Most accountants don’t have the in-house expertise to process claims, so they refer clients to R&D tax specialists. For many companies, the process is slow, expensive, and frustrating, because these specialists charge very high fees, often taking weeks to process claims”.

In contrast, McCann says Claimer’s platform makes it easy for businesses to reliably complete their R&D relief claims without any prior tax knowledge. After you upload a claim to the platform — which includes the ability to pull numbers from your accounting software — Claimer’s in-house tax specialists check and optimise it before it is submitted to HMRC.

“We’ve processed claims ranging from £1,000 to over £2 million with a 100% success rate (i.e. no rejections or reductions). Our customers have also awarded us 5 stars on TrustPilot,” he adds.

To that end, Claimer’s success is aligned with that of its customers. The startup charges a fee of 5% or less of the saving/credit received in R&D tax credits, capped to £10,000. McCann says this is much less than the typical uncapped 20-30% usually charged by specialists, “often with undesirable terms such as multi-year lock-in contracts, hidden costs, and large minimum fees”.

Meanwhile, Claimer plans to use the seed funding to grow its engineering team and build version two of the product, which McCann says will utilise open data and machine learning, making it possible for claims to be created automatically.

Amazon ramped up content spending to $16.6B in 2022, including $7B on originals
EU lawmakers launch tips hotline to catch Big Tech’s ‘shady’ lobbying
OnePlus teases tablet, mechanical keyboard
AI-generated ‘Seinfeld’ suspended on Twitch for AI-generated transphobic jokes
TikTok introduces a strike system for violations, tests a feature to ‘refresh’ the For You feed