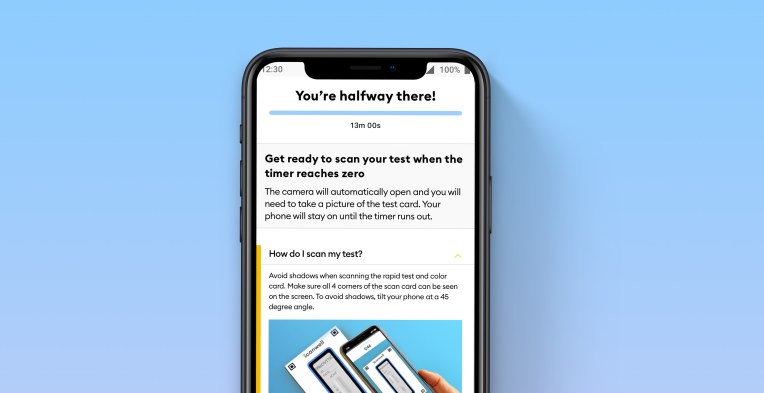 At-home diagnostics startup Scanwell, which produces smartphone-based testing for UTIs, is working on getting at-home testing for the novel coronavirus into the hands of U.S. residents. The technology, which was developed by Chinese diagnostic technology company INNOVITA and has already been approved by China’s equivalent of the FDA and used by “millions” in China, can be taken at home in 15 minutes with the guidance of a medical professional via telehealth, and produces results in just hours.

Scanwell’s test will require FDA clearance, but the company tells me that it’s in the process of securing approval through the FDA’s accelerated emergency certification program. The FDA guidance says that this approval process should take 6-8 weeks (though that “could be faster,” Scanwell says), and Scanwell is aiming to be ready to go with shipping these as soon as it receives that approval. While the U.S. drug regulatory agency previously had only included PCR tests in its protocols, it updated that guidance to include serological tests earlier this week. Scanwell further says they “don’t anticipate any issues with FDA approval.”

The test that Scanwell is aiming to launch uses what’s called a ‘serological’ technique, which looks for antibodies in a patient’s blood. These are only present if someone has been exposed to the SARS-CoV-2 virus, since as of right now researchers haven’t found any evidence that natural antibodies to this particular virus exist without exposure. By contrast, the types of tests that are currently in use in the U.S. are “PCR” tests, which use a molecular-based approach to determine if the virus is present genetically in a mucus sample.

The PCR type of test is technically more accurate than the serological variety, but the serological version is much easier to administer, and produces results more quickly. It’s also still very accurate on the whole, and is much cheaper to produce than the PCR version. Plus, it could help expand efforts beyond testing only the most severe cases with symptoms present, and do a much better job of illuminating the full extent of the presence of the virus, including among people with mild cases who have already recovered at home, and those who are asymptomatic but carrying the virus with the possibility of infecting others.

Also, while other, PCR-based at-home testing options already exist, like one from Everlywell that will start going out on Monday, require round-tripping test samples, adding time, complexity and cost and relying on testing materials like swabs that are in short supply globally.

Once the test is available, people deemed eligible via Scanwell’s screening process in their Scanwell Health app will be sent the test via next-day delivery. They’ll be guided by telehealth partner Lemonade’s licensed doctors and nurse practitioners, and they’ll then receive results and further guidance about those results via the app within a few hours. The whole testing process will cost $70, which Scanwell says just covers its costs (it’s also looking at ways to provide free service to those who need it), and will be deployed first in Washington, California and New York, as well as other areas depending on the severity of their coronavirus situation.

That the tests will take potentially 6-8 weeks to come to market seems like a long time, given the current state of the rapidly evolving COVID-19 situation and testing. But we’ll likely still be very much in need of testing options at that time, especially ones that can serve people who aren’t necessarily meeting the criteria for other available testing resources.