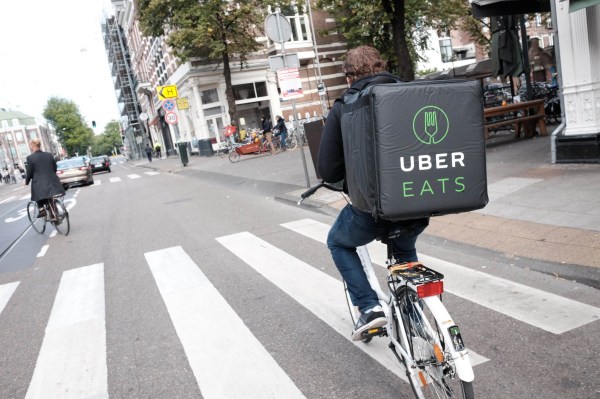 Uber Eats is waiving delivery and activations fees in the UK to support restaurants hit by decreasing demand during the coronavirus crisis.

The measure will apply until March 31 when it says it will review it.

On Monday the on-demand food delivery giant announced a similar waiver of delivery fees in the US.

The announcement by Uber Eats UK comes shortly after Just Eat UK said it would reduce its commission and waive some fees for 30 days — as part of an emergency support package for partner restaurants struggling to cope with disruption to their businesses.

“The high street is being hit hard by Coronavirus but the sector can play a critical role in helping the thousands of people who rely on it — for work and as an essential service — during this difficult time,” said Eats UK general manager, Toussaint Wattinne, in a statement.

“We are putting in place a range of initiatives to continue to support restaurant partners, particularly small business owners, as they keep their kitchens firing to feed people across the country.”

Another support measure it’s offering is a new opt-in program for all restaurants on its platform to get daily payments, rather than the standard weekly payment — to help with cash flow.

Today the UK government finally ordered bars and restaurants to close — having previously only advised citizens to stay away from social spaces to help reduce the spread of COVID-19.

Confirmed cases in the country have been increasing steady in recent weeks, approaching 4,000 at the time of writing, with 177 deaths recorded in total so far.

The closure order applies to bars and restaurants nationwide from tonight (Saturday morning) — cementing the economic shock the coronavirus is dealing to the sector.

However food delivery remains an option on the table: Earlier this week the government said it would relax planning regulations to allow pubs and restaurants to offer takeout services straightaway, without needing to apply for permission.

Uber Eats looks to be hoping to capitalize on the contingency provision by onboarding restaurants that haven’t previously offered takeout. It said today it’s adding a fast-tracked onboarding process for new restaurants to help them get online on its platform as soon as possible.

It’s also expanding the number of convenience stores available via the app — and waiving delivery fees for them too.

Keeping the nation fed through the crisis is another pressing operational headache for the UK government as worried shoppers have stripped supermarket shelves — putting strain on ‘just in time’ supply chains. Again, Uber looks to be hoping to help plug any gaps by expanding the surface area for food and grocery orders.

Also today it said it will be introducing a new contactless delivery product feature as a measure that’s intended to shrink the health risks for couriers making deliveries.

The public health crisis has shone a critical spotlight on the lack of protections for platform workers who aren’t covered by employment rights like sick pay — meaning they can either self isolate or earn money.