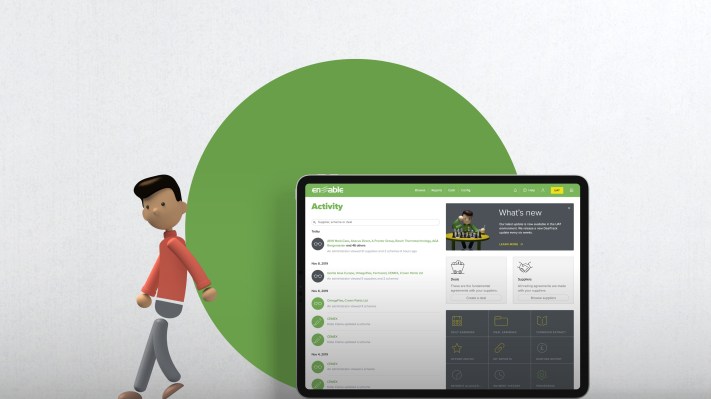 Enable, a U.K. startup that has developed a cloud-based “rebate management solution” to help distributors, manufacturers and retailers manage rebates, is announcing $13 million in Series A funding.

The round is led by Menlo Ventures, with participation from Sierra Ventures. As part of the investment, Menlo Ventures’ Steve Sloane has joined the Enable board.

Founded by long term business partners Andrew Butt and Denys Shortt in 2015 but launched fully in 2017, Enable makes it easy for distributors to track, manage, and optimise rebates. Rebate incentives offered by suppliers are a common industry practice, while the rebates offered are increasingly relied on by distributors to turn a profit.

However, the agreements put in place and the tracking and validating of qualifying terms has created a back office headache and many wasted hours on behalf of parties involved. Enable has set out to digitise the whole process and in turn bring suppliers and distributors more closely aligned.

“We take the pain away with our fully automated platform which becomes the system of record for all B2B deals, and the calculator of granular deal earnings,” explains Enable’s Andrew Butt. This includes a breakdown by product, location, day, supplier, and customer and the reconciliation of sales and purchase transactions pertaining to those deals.

“The complexity of these deals has also massively increased,” says Butt. “For distributors to survive, they must take full control of these deals and ensure that money is not being left on the table, yet until now there has been a lack of software that is designed around the distributor”.

In addition, he says that Enable is also allowing customers to create more targeted and better deals that “increase sales and profit, improve cash flow, and strengthen relationships” with suppliers. “We do this by identifying opportunities in the exiting deals and spotting where new deals can be created,” he adds.

Butt says the opportunity is huge, too, with Manufacturers issuing more than $1 trillion in rebates each year. Noteworthy, until now the company has been largely and in the last two years has on-boarded more than 2,000 trading partners processed rebates on more than $30 billion in sales. Customers include Rexel, Travis Perkins, and Wolseley, as well as other distributors, buying groups, and retailers from across the U.S., Canada, and Europe.

More broadly, Butt frames Enable as a “collaborative platform” where manufacturers and distributors come together in a shared ecosystem to do better deals. “It’s like a ‘Dropbox for deals’,” he says. “[In contrast,] our competitors provide a traditional ‘private’ installation of their solution, totally segregated for each customer”.

Amazon ramped up content spending to $16.6B in 2022, including $7B on originals
Spotify’s test of a Friends tab on mobile hints at expanded social ambitions
Netflix gives Premium members more download devices and spatial audio on 700+ titles
‘Black Panther: Wakanda Forever’ gets its streaming debut on Disney+
‘Nothing, Forever,’ an AI ‘Seinfeld’ spoof, is the next ‘Twitch Plays Pokémon’