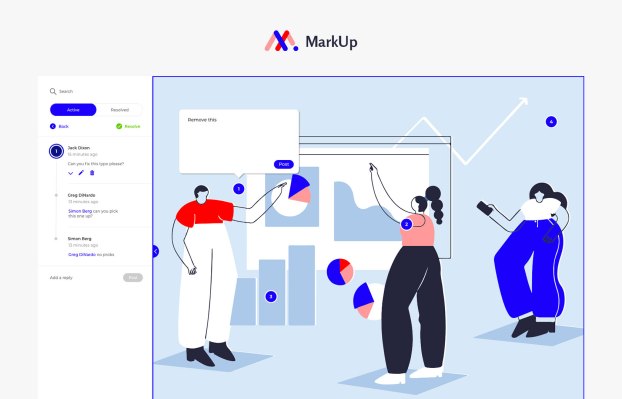 When designers need to collaborate with other teams, they can currently turn to products like InVision and Zeplin. But Ceros creative director Jack Dixon said there’s a “pretty interesting gap in the market” — once you move beyond prototypes and start working with websites that are either live or in staging, the process starts to become fragmented, relying on screenshots and email/phone/Google Docs.

That’s why the company (which focuses on powering interactive content “experiences”) is launching a new product called MarkUp. The product was created by a team led by Greg DiNardo and Alex Bullington, who joined Ceros last August through the acquisition of their polling and market research startup Arbit.

Dixon, DiNardo and Bullington gave me a quick demo, showing off how users can mark areas of interest on a website, leave comments and tasks, then mark revisions as completed.

It all looked pretty simple and straightforward, but DiNardo suggested that it’s a real technical challenge — even more than he and Bullington had expected — to provide those kinds of features on top of a live site.

He added that the product’s simplicity was very much by design: “I don’t think we’re going to add a million features … The goal is honestly simplicity, something that graphic designers can kind of live in.”

Eventually, MarkUp could be used not just to solicit design feedback across teams, but also from the public at-large.

Ceros says MarkUp will function separately from the core Ceros Studio platform, but it will be available for free to Studio customers. In fact, it’s already being used by designers at the Huffington Post, Cushman & Wakefield and Informa.

“As of today we want to remove any friction or barrier to entry, so it’s 100 percent free to Ceros customers,” Dixon said. “Getting the  involvement of the broadest community and user bas is going to be critical for this. What we’re learning is that some of the enterprise clients might pay for bigger, more grown-up features [like white labeling]. We can figure out how to monetize later.”

Samsung has the MacBook Pro in its sights with the $2,400 Galaxy Book 3 Ultra
Apple execs on M2 chips, winning gamers and when to buy a Mac
The UK rolls back controversial plans to open up text and data mining regulations
Addressable raises $7.5M to match crypto wallets to Twitter accounts. But how?
Raylo raises $136M to build out its gadget lease-and-reuse ‘fintech’ platform