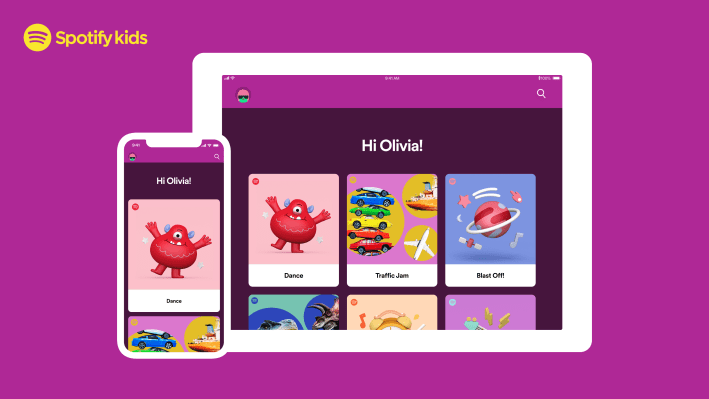 Last fall, Spotify debuted a standalone Kids application, aimed at bringing kid-friendly music and stories to Spotify Premium Family subscribers, initially in Ireland. Today, that app is being made available broadly in the U.S. Canada and France, the company announced on Tuesday. The Kids app is still considered a “beta” as it arrives in these new markets, Spotify says. However, it’s been expanded with more songs, stories and other content since the original beta tests began.

The app is largely designed to boost sign-ups for Spotify’s top-tier subscription, the $14.99 (USD) per month Premium Family plan. This plan offers up to 6 people in the same household access to Spotify’s on-demand, ad-free music streaming service, each with their own personalized account. It also includes other exclusive features like Family Mixes, as well as parental controls, and now, the Spotify Kids application.

Spotify has long since realized its one-size-fits-all strategy didn’t work for families. It needed to build a unique experience separate from its flagship app in order to best cater to children — and to abide by the regulations around data collection and consent with regard to apps aimed at kids.

Spotify designed the Kids app from the ground up with the needs of both parents and kids in mind. For parents, it offers peace of mind that children won’t accidentally encounter inappropriate lyrics, for example, or songs with more adult themes. To ensure this remains the case, Spotify editors hand-curate the content on the Kids app by following a set of guidelines about what’s inappropriate for children. It doesn’t utilize algorithms to make selections about what’s included, the way the spinoff app YouTube Kids does.

Instead of being a fully on-demand product, Spotify Kids offers playlists for little ones focused around categories like Movies, TV, Stories, or various activities, like “Learn” or “Party,” among others. As kids grow older, they may also want to follow their favorite artists in the app.

The app can also be customized by age range. For younger kids, there’s character-based artwork and content aimed at the preschool set like singalongs or lullabies. Older kids will see a more detailed experience and have access to more popular tracks that are also age-appropriate.

The programmed playlists in Spotify Kids are curated by editors hailing from some of the most well-known brands in kids’ entertainment — including Nickelodeon, Disney, Discovery Kids, Universal Pictures, and others. They know what kids want and also what sells to the parents who pay.

Since its launch in Ireland, Spotify Kids has rolled out to Sweden, Denmark, Australia, New Zealand, the U.K., Mexico, Argentina, and Brazil.

It has also added more content since its original debut, says Spotify.

“We heard loud and clear that both parents and kids are craving more content in the app, so we’ve been increasing the number of tracks available. We’ve also heard from parents that they want even more control of the content, so we are working on some exciting new features,” noted Spotify’s Chief Premium Business Officer Alex Norström, in a statement.

Today the Spotify Kids app has over 8,000 songs in its catalog — 30% more than when it first arrived in Ireland, and growing.

It also has more local content, with 50% of the catalog in the app localized by market. Its collection of kid-friendly audiobooks and stories has grown as well, and the app now offers over 60 hours of stories, including fairy tales, classics, short stories, and stories from Disney Music Group.

In response to user feedback, there’s also now more bedtime content like lullabies, calming music and sounds, and bedtime stories. (And yes, this finally means that Spotify parents will stop having their year-end Spotify Wrapped ruined by lullabies.)

In response to the COVID-19 outbreak, there’s also a new global playlist called “Wash Your Hands” which includes songs that teach kids to wash hands and to cough and sneeze properly. This includes the new song from Pinkfong “Wash Your Hands with Baby Shark.”

And to aid parents now educating children at home, there’s a “Learning” playlist hub where you’ll find songs about the ABC’s, counting, science and more.

The app is available today in the U.S., Canada, and France on iOS and Android. The app is a free download, but requires a Spotify Premium Family membership.

What’s going on in the Dutch startup scene?
Netflix teams up with Bumble so users can bond over popular TV shows
BMW iVentures continues its love affair with EVs, backing this Bulgarian startup’s $13M A-round
This startup hopes to take on Canva, raising an $11.6M Series A for its design platform
Renaissance Fusion raises $16.4 million to build nuclear fusion technology in Europe