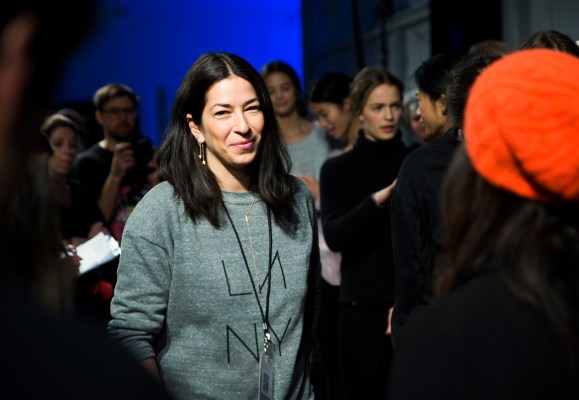 When Rebecca Minkoff first moved to New York City, the then-18-year-old was making $4.75 an hour.

“I just kept working for this designer and someone was telling me what to do every day. I just didn’t like that. And I thought if I’m going to work as hard, it’s going to be for myself and I want to call my own shots,” she said. “I didn’t want to be told what to do, frankly.”

Self-employment for Minkoff turned out just fine; in 2001, she redesigned the iconic “I Love New York” shirt and it appeared on The Tonight Show. After a shout-out from Jay Leno, Minkoff spent the next eight months making T-shirts on the floor of her apartment and quit her job to start designing full time.

We caught up with Minkoff to learn more about how she grew her brand into a global fashion company with the help of her brother, her problem with the unicorn mentality and why she thinks the “invisible barrier” is the future of retail tech.

This interview was edited for brevity and clarity.

TechCrunch: What gave you the energy and drive to become an entrepreneur?

Rebecca Minkoff: Long story. My mom would sell these cast covers, like decorative covers for people with broken arms at the flea market. And I was like, I am going to have a booth here. So I made all these tie-dye shirts and no one bought anything but it was just this idea of like, I can make something I can sell. My mom always taught that. When I wanted a dress, she taught me how to sew a dress instead of buying the dress. And so, I just got this bug for creating things out of nothing.

The constant thread was, “I’m not going to pay for this. You’re going to learn how to do it.”