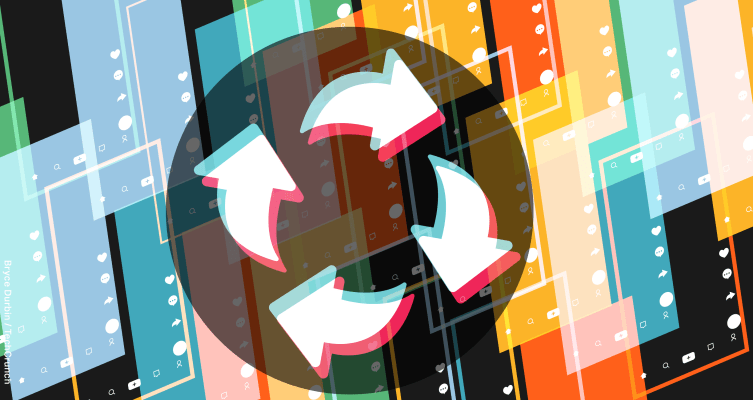 Many TikTok videos don’t start from scratch, so neither can its competitors. TikTok is all about remixes where users shoot a new video to recontextualize audio pulled from someone else’s clip, or riff on an existing meme or concept. That only works because TikTok’s had time to build up an immense armory of content to draw inspiration from.

Creators will find themselves unequipped trying to get started on TikTok copycats including Facebook Lasso, and Instagram Reels which is testing in Brazil. Direct competitors like Triller and Dubsmash are racing to build up their archives. YouTube Shorts, which The Information today reported is in development, only has a shot if Google lets users harness the 5 billion videos people already watch on YouTube each day.

This is the power of what I call “content network effect”: Each piece of content adds value to the rest. That’s TikTok.

You’re likely familiar with traditional network effect — ‘a phenomenon whereby a product or service gains additional value as more people use it.’ It’s not just the network itself that gains value, as the value delivered to each user increases too. Today’s top social networks are shining examples. The more people there are on Facebook, Instagram, or Twitter, the more people you can connect to, and the more material their relevance algorithms can draw on to fill your feeds.

If you had to choose between using two identical social networks, you’re probably going to pick the one with more friends or creators already onboard. Network effects raise the switching cost of moving to a different network. Even if it has better features, fewer ads, or less misinformation and bullying, you’re unlikely to leave a robust network behind and decamp to a sparser one. That makes scaled social networks difficult to Disrupt. All the top ones have been around for almost a decade or more.

Except for TikTok. The Chinese music/video app has managed to demonstrate a new concept of “content network effect”. In its case, each video uploaded to the app makes every future potential video more valuable. That’s because all the content on TikTok serves as remix fodder for the rest. Every song, dance, joke, prank, and monologue generates resources for other creators to exploit. It’s a bottomless well of inspiration.

TikTok productizes remix culture by making it easy to “use this sound”. Tap the audio button on any video and it becomes yours. Click through and you’ll see all the other videos that use it. TikTok even offers a whole search engine for sorting through sounds by categories like Trending, Greatest Hits, Love, Gaming, and travel. Sometimes remixes are based on an idea rather than an audio. #FlipTheSwitch sees couples instantly swapping clothes when the light flicks off, and has collected over 3.6 billion videos across over 500,000 remixed versions of the video.

You can even duet with the original creator, sharing your video and theirs side-by-side simultaneously. A solo performance becomes a chorus as more duets are hitched together. Meanwhile, remixes of remixes of remixes provide an esoteric reward for hardcore users who recognize how a gag has evolved or spiraled into absurdity.

Other apps in the past have spawned video responses, hashtags, quote-tweets, surveys, and chain letters and other ways for pieces of content to interact or iterate. And there’s always been parodies. But TikTok proves the power of forging a social app with content network effect at its core.

Facilitating remixes offers a way to lower the bar for producing user generated content. You’d don’t have to be astoundingly creative or original to make something entertaining. Each individual’s life experiences inform their perspective that could let them interpret an idea in a new way.

What began with someone ripping audio of two people chanting “don’t be Suspicious, don’t be suspicious” while sneaking through a graveyard in TV show Parks & Recs led to people lipsyncing it while trying to escape their infant’s room without waking them up, leaving the house wearing clothes they stole from their sister’s closet, trying to keep a llama as a pet, and photoshopping themselves to look taller. Unless someone’s already done the work to record an audio clip, there’s nothing to inspire and enable others to put their spin on it.

TikTok’s archive vs the world

That’s why I wrote that Mark Zuckerberg misunderstands the huge threat of TikTok after the CEO told Facebook’s staff that “I kind of think about TikTok as if it were Explore for Stories”. Facebook and Instagram found massive success cloning Snapchat Stories because all they had to do was copy its features. Stories are autobiographical life vlogging. All you need are the creative tools, which Instagram and Facebook rebuilt, and people to share to, which the apps had billions of.

But TikTok isn’t about sharing what you’re up to like Stories that typically start from scratch since each user’s life is different. It’s micro-entertainment powered by content network effect. If TikTok competitors give people the same video recording features and distribution potential, they’ll still be missing the archive of source material.

Facebook’s Lasso looks just like TikTok but it’s failed to gain steam since launching in November 2018. Instagram Reels smartly copies TikTok’s remixing tools, but if the Brazilian tests go well and it eventually launches in English, it will start out flat footed.

When YouTube launches Shorts, as The Information’s Alex Heath and Jessica Toonkel report it’s planning to do before the end of the year, it will be buried inside its main app. That could make it impossible to compete with a dedicated app like TikTok that opens straight to its For You page. Its one saving grace would be if YouTube unlocks its entire database of videos for remixing.

Thanks to its position as the default place to host videos and its experience with searchability that Facebook and Instagram lack, YouTube Shorts could at least have all the ingredients necessary. But given YouTube’s non-stop failures in social with everything from Google+ to YouTube Stories to its dozen deadpooled messaging apps, it may not have the chef skills necessary to combine them.

Other social networks should consider how the concept applies to them. Could Facebook turn your friends’ photos into collage materials? Could Instagram let you share themed collections of your favorite posts? Remix culture isn’t going away, so neither will the value of fostering content network effects. With video consumption outpacing professional production, remixes are how the world will stay entertained and how amateurs can contribute creations worthy of going viral.

Apple execs on M2 chips, winning gamers and when to buy a Mac
‘Nothing, Forever,’ an AI ‘Seinfeld’ spoof, is the next ‘Twitch Plays Pokémon’
Political ads face tougher targeting restrictions in EU if MEPs get their way
Neko, Daniel Ek’s next play, is another spin on preventative healthcare
‘Black Panther: Wakanda Forever’ gets its streaming debut on Disney+