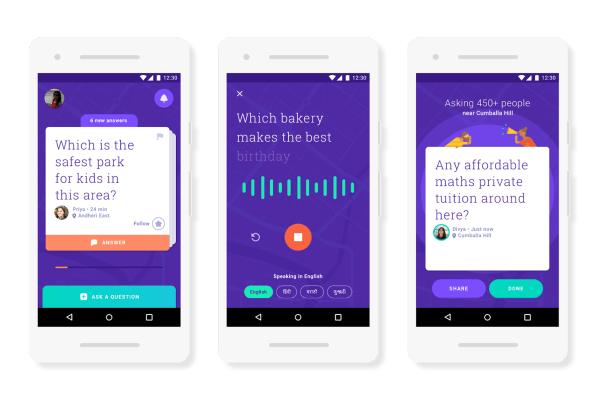 Google is shutting down Neighbourly, a Q&A social app that it launched in select parts of India two years, the company has informed users.

The app, developed by company’s Next Billion Initiative, aimed to give local communities an outlet to seek answers to practical questions about life, routine and more.

At the time of the app’s launch, Google told TechCrunch that it believed that an increase in urban migration, short-term leasing and busy lives had changed the dynamic of local communities and made it harder to share information quite so easily.

The app supported voice-based entry for questions and a range of local languages.

In an email, Google said Neighbourly helped users find answers to over a million questions, but it did not get the traction the company was hoping for. The app will shut down on May 12, but users have another six months to download their data.

“We launched Neighbourly as a Beta app to connect you with your neighbors and make sharing local information more human and helpful. As a community, you’ve come together to celebrate local festivals, shared crucial information during floods, and answered over a million questions,” the company wrote to users.

“But Neighbourly hasn’t grown as we had hoped. In these difficult times, we believe that we can help more people by focusing on other Google apps that are already serving millions of people everyday,” it added, pointing users to explore Google Maps’ Local Guide, which also allows sharing of knowledge with local communities.

The app had such low-traction that third-party intelligence services such as App Annie and Sensor Tower don’t have any substantial data about it. But on Play Store, Neighbourly is listed to have more than 10 million downloads.

Post Series-B, anti-fraud platform SEON acquires AML startup Complytron for a rumoured €2.5M
TikTok introduces a strike system for violations, tests a feature to ‘refresh’ the For You feed
Zopa, the UK neobank, raises $93M more at a $1B+ valuation
Nothing’s second phone will take on the US this year
Ovni Capital is a new French VC firm backing startups with global ambitions