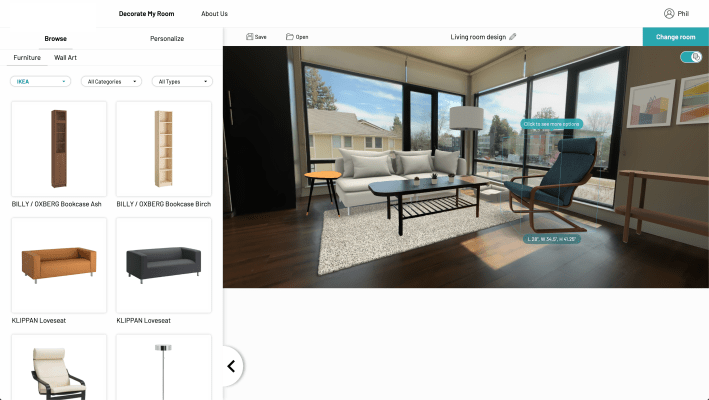 Ikea, the Swedish home furnishings and decor giant, has been one of the leaders among retailers when it comes to adapting to tech innovations that impact its business, being one of the first to launch augmented reality applications, partnering with others to develop smart home devices and launching a business unit to build that out further, investing in relevant startups, and even picking up of logistics startups to expand its reach. Today, it’s taking another step in that trajectory with a tech acquisition: the company has acquired Geomagical Labs, an AI imaging startup based out of Mountain View.

Geomagical Labs has not had a lot of fanfare, but quietly it’s been developing a number of computer vision-based technologies. Its first product — which allows a user to quickly scan a room using any smartphone, render that into a panoramic 3D picture in a few minutes, remove all the furniture in it, and then, in the words of Geomagical’s founder and CEO Brian Totty, “play dress up” by adding in new items to scale — will be implemented by Ikea into its website and apps to let people start to create more accurate visualisations of their spaces, and how they would look with Ikea pieces in them.

To be clear, Ikea already had developed an AR-based visualisation tool, as one of the first to use Apple’s AR developer kit a few years ago, but this represents a far more accurate and useful development on that, besides also giving Ikea the tools to build more features and tools in the future in house.

(That is the kind of technology that is always useful, but perhaps especially right now, when physical stores are being shut down in many countries around the world to stave off spread of the coronavirus.)

“We’re excited because the user can really play around with this and see how something would fit immediately,” said Barbara Martin Coppola, Chief Digital Officer, Ikea Retail, in an interview. She added that Ikea decided to acquire the startup rather than just partner with it for “a lot of different reasons, with the first being that the tech is exceptional and groundbreaking.” The app and online experience that Ikea is developing will be free to use, and for now, there are no plans to offer the tech as a service to other retailers, a la an AWS model, she added.

Terms of the deal — which technically is being made between Geomagical and the Ingka Group, the company that owns Ikea — are not being disclosed, the companies said. But Totty — a serial entrepreneur who was an early Groupon exec (by way of acquisition of a previous startup) as well as one of the founding employees of Inktomi (remember them?) — said that the startup and investors were “very happy” with the terms.

Those investors and how much it had previously raised is also not fully disclosed but they included Totty himself, Andrew Mason (Groupon’s cofounder and former CEO) and a number of other individuals.

From what we understand, the startup had been talking to a number of other interested parties, including other retailers and a couple of large tech companies. (For some more context, computer vision has been a very hot area for acquisition, both to pick up products and talent, and Apple and Google are among those that have been aggressively acquiring in this area in recent times to expand their own platforms.)

The reason why Geomagical Labs went with Ikea versus a tech exit, Totty said, was because the company was keen to make sure that its technology saw the light of day — rather than potentially get subsumed into a bigger tech machine that might or might not use it, or instead choose to redeploy the team (which includes six PhDs, including Totty himself) on something completely different, experience Totty would know given his track record.

“There has been so much progress in cell phones and AI, finally giving us this dream of waving your camera in front of you and to do cool things,” he said. He described going to Ikea as “a great bird in the hand” play.

“You plan all your options and you could decide to wait, but you don’t always have the ability to get partnerships of this kind. The question for us was, do we raise another round of funding, or do a 50 or larger percent acquisition? I don’t really want to talk about scenario planning but I believe what we’ve built is broadly valuable to all of the industry right now. And the challenge of a general purpose tech with a special product is that your domain of applicability is lower. We didn’t want to be talented people with a little technology but a game changer.”

Before Ikea, Coppola spent her entire career working for big tech companies, including many years at Google, as well as Samsung and others, and she sees this acquisition as an essential move in focusing the retailer even more squarely on its technology opportunity, by not just adopting new innovations but by owning the IP and building the technology itself.

“Ikea has spent more than $200 million investing in or acquiring 23 companies to date,” she said. “both to make a positive contribution to the sector and fulfil Ikea’s vision. This will continue to be the case. Acquisitions and investments will not stop and will increase,” she added.