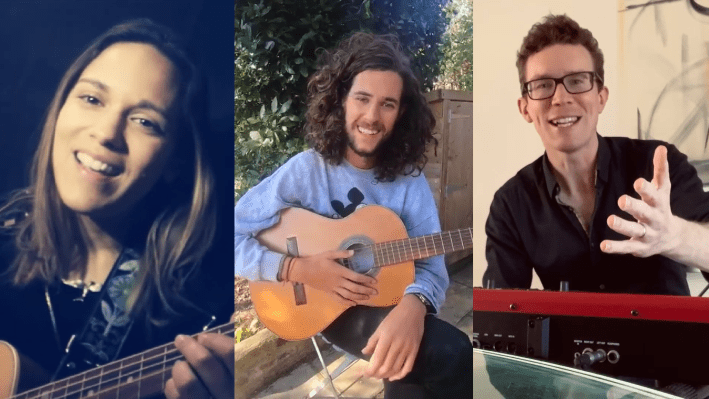 Encore, the U.K. marketplace that lets you find and book a musician or band online for your event, is launching a new online product to help musicians find an additional revenue stream during the coronavirus pandemic, and bring a little joy to all of us.

Dubbed musical messages, the new offering lets you pay one of Encore’s musicians to create and send a personalised musical message to loved ones, or anyone you cannot be with in-person, whilst also supporting the U.K.’s national health service (NHS). That’s because, for every message commissioned, Encore is making a donation of £2.50 to the NHS.

At launch, videos cost from £15 and customers have the opportunity to support musicians further by adding a tip once they receive the video. Encore co-founder James McAulay tells me during the MVP tests carried out over the last week, some customers have tipped up to £50 per video, in a spirit of wanting to keep musicians in work.

“Coronavirus has caused thousands of events to be cancelled or postponed around the U.K., [and] musicians all over the U.K. are now stuck at home unable to earn money from performing,” McAulay explains. “In March alone, the Encore team had to process almost 500 gig cancellations, so we began brainstorming ways to help these musicians make money from home”.

He said the most obvious route to income for a musician right now is asking for donations on livestreams, “but we heard from our musicians that they’ve seen mixed results from this approach”. That’s likely because the internet is now awash with live streaming, and supply is perhaps outpacing demand.

“We wanted to go beyond this and develop a compelling product that didn’t rely on asking for donations,” says McAulay. “We also wanted to find a way to spread messages of love and hope throughout one of the darkest periods any of us have lived through, which led us to the idea of personalised music messages”.

In testing, Encore has already had almost 100 videos requested and filmed since last week, generating nearly £1,000 for a handful of musicians and donating hundreds of pounds to the NHS. But (hopefully) it’s just the start.

“The reactions from both the senders and recipients have been extremely heartwarming and musicians are having fun with it!” adds the Encore co-founder. “This is also reflected in the success of the tipping mechanism, with people sometimes tipping more than the original video amount”.

Meanwhile, examples of musical messages sent so far include birthday messages when people can’t celebrate in person, wedding anniversaries, messages to people in hospital or isolation, or something as simple as “We love you and miss you” requests.

“We’ve worked with 10 musicians over the last week to build the beta, and we’re about to release to all 20,000 musicians this week,” says McAulay.

Renaissance Fusion raises $16.4 million to build nuclear fusion technology in Europe
Being the steady hand in market uncertainty with Sebastian Siemiatkowski from Klarna
Google created an AI that can generate music from text descriptions, but won’t release it
Welcome to the Jungle grabs $54M for its slick job platform
This startup hopes to take on Canva, raising an $11.6M Series A for its design platform