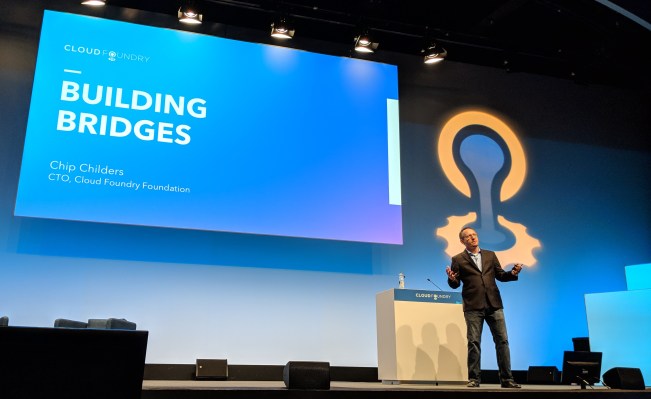 The Cloud Foundry Foundation (CFF), the home of the Cloud Foundry open-source developer platform, today announced that its executive director Abby Kearns is stepping down from her role to pursue an executive role elsewhere.

If you’ve followed the development of the CFF for a while, it won’t come as a surprise that its current CTO, Chip Childers, is stepping into the executive director role. For the last few years, Kearns and Childers shared duties hosting the foundation’s bi-annual conferences and were essentially the public faces of the organization.

Both Kearns and Childers stepped into their roles in 2016 after CFF founding CEO Sam Ramji departed the organization for a role at Google . Before joining the Cloud Foundry Foundation, Kearns worked on Pivotal Cloud Foundry and spent over eight years as head of product management for integration services at Verizon (which, full disclosure, is also the corporate parent of TechCrunch).

Today, according to its own data, the Linux Foundation-based Cloud Foundry project is used by more than half the Fortune 500 enterprises. And while some use the open-source code to run and manage their own Cloud Foundry platforms, most work with a partner like the now VMware-owned Pivotal.

“I am tremendously proud of Cloud Foundry and of the Foundation we have all built together,” said Kearns in today’s announcement. “Cloud Foundry offers the premier developer experience for the cloud native landscape and has seen massive adoption in the enterprise. It also has one of the strongest, kindest, most diverse communities (and staff) in open source. I leave the organization in the best hands possible. Chip was the first Foundation staff member and has served as CTO for more than four years. There is literally nobody else in the world more qualified for this job.”

During her role as executive director, Kearns helped shepherd the project through a number of changes. The most important of those was surely the rise of Kubernetes and containers in general, which quickly changed the DevOps landscape. Unlike other organizations, the CFF adapted to these changing times and started integrating these new technologies. Over the course of the last two years, the Cloud Foundry community started to deeply integrate these cloud-native technologies into its own platform, despite the fact that the community had already built its own container orchestration system in the past.

As Childers told me last year, though, the point of Cloud Foundry isn’t any specific technology, though. Instead, it’s about the developer experience. Ideally, the developers who use it don’t have to care about the underlying infrastructure and can simply integrate it into their DevOps workflow. With a lot of the recent technical changes behind it,

“We as a Foundation are turning the page to a new chapter; raising the profiles of our technical contributors, highlighting the community’s accomplishments and redefining the Cloud Foundry platform as the best Kubernetes experience for enterprise developers,” said Childers today. “Abby has done a tremendous job leading the Foundation through a period of massive growth and upheaval in the cloud native world. Her leadership was instrumental in building Cloud Foundry as a leading cloud development tool.”

As the CFF also today announced, Paul Fazzone, SVP Tanzu R&D at VMware, has been named Chairman of the Board of Directors, where he replaces Dell EMC global CTO John Roese.

“This next chapter for Cloud Foundry will be a shift forward in focusing on evolving the technology to a Kubernetes-based platform and supporting the diverse set of contributors who will make that outcome possible,” said Fazzone. “In my new role as Chairman of the Board, I look forward to helping guide the Foundation toward its goal of expanding and bolstering the ecosystem, its community and its core of users.”